Yesterday's off day gives me the chance to post some images saved to my drafts folder and provide an update to my series on the Phillies team issued sets.

First up is a group of Chachi Almost cards, featuring players who never officially played with the team and these four players were all non-roster invitees to spring training.  Ernesto Frieri was released on April 5th and he has yet to latch on elsewhere.  Catcher J.P. Arencibia requested and received his release from the IronPigs on May 16th and signed with the Rays organization a few days later.

Ryan Jackson's services were no longer needed in Lehigh Valley when J.P. Crawford earned his promotion and he was sold to the Angels on May 20th.  Finally, Bobby LaFromboise, who appeared to be close to making the team out of spring training, was released on June 2nd.  His spot on the IronPigs was claimed by the activated Mario Hollands who missed all of last season following Tommy John surgery.  LaFromboise is the only one of this quartet with an official Phillies baseball card, having appeared in the first team issued photo card set.

Both Kelly Dugan and Jesse Biddle were on the offseason 40-man roster, but were eventually removed and moved on to other teams.  Dugan is currently playing with the Cubs Double-A team in Tennessee after spending his first seven professional seasons with the Phillies organization.

Biddle is recovering from Tommy John surgery and will miss the entire 2016 season.  He was traded to the Pirates in early February for pitcher Yoervis Medina and then claimed off waivers by the Braves in March.  He's currently on the Braves 60-day disabled list.

Reader and Friend O' the Blog Steve F. recently e-mailed me the image below, showing an uncut sheet of 1984 Tastykake Phillies cards.  The sheet includes the rarely seen seven "update" cards, including the very difficult to find cards of Steve Jeltz, Darren Daulton and Steve Fireovid.  As reader and collector Rick pointed out in his comment to the original 1984 Tastykake Phillies post, these update cards were never released to the general public.  A local baseball card dealer somehow obtained the sheets and had them professionally cut, selling the additional seven update cards as a separate set.

I still find this stuff fascinating and thanks to Steve F. for sending me the image below.  And I still need the Fireovid and Jeltz cards for my collection! 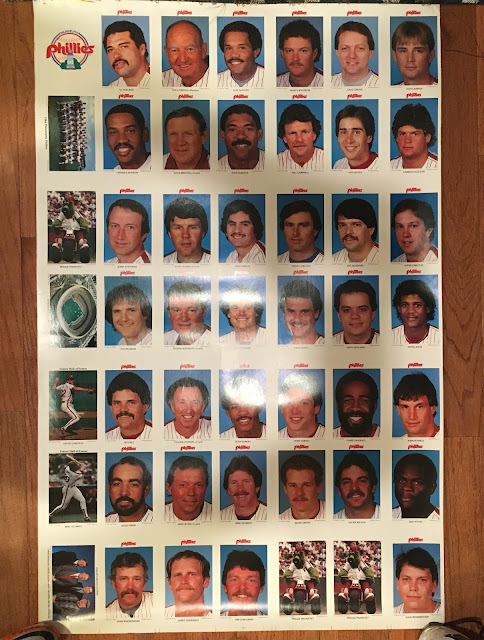