Number of Cards:  44
Card Size:  4" x 6"
Description:  Following the standard formula for team-issued photo card sets in recent years, the front of the cards feature the player's name, position and uniform number on a band across the bottom of the card.  The band for this set is wood-grained, using a design element last used for the 2012 first edition team set.  A Phillies logo appears on every card in the top left.  The horizontal card backs feature biographical information and complete career statistics.

With the exception of the Cody Asche card, all photos used for these cards are from the first month and a half of the 2016 season.

How Distributed:  The second series set went on sale at Citizens Bank Park on or around May 20th for $5 a set.  I attended the game on May 17th, and I'm fairly certain the first series set was still on sale at that point.

An update set was sold at the ballpark beginning with the August 12th Alumni Weekend series.  The update set removes four cards and adds six cards to the set.

Complete Standard Checklist (38):  The cards are unnumbered, but I've presented them below ordered by uniform number.

The following players who were in the first series set have been dropped from this second series set (6):  Bobby LaFromboise, Charlie Morton, Edward Mujica, James Russell, Daniel Stumpf and Darnell Sweeney.  Morton is out for the season with an injury, Stumpf has been suspended for PEDs and the other four players are all currently with the Lehigh Valley IronPigs.

Variations/Rarities (6/13/16):  Fellow collector Steve F. sent the scan below of cards for Joseph and Jimmy Paredes, which were available at the ALS Festival on June 9th.  Hopefully these cards make it into the sets currently for sale at the ballpark.  (They did - see above!) 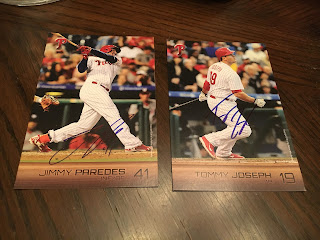 Update Set (8/13/16):  On August 12th, I purchased an update set which added cards of the six players listed above and removed the cards for the following four players:  David Lough, Emmanuel Burriss, Elvis Araujo and Dalier Hinojosa.

Update (8/29/16):  As pointed out by Steve F. in his comment the Thome card should be considered a short-print, as it was only intended to be included within the photo card set during Alumni Weekend.

Minor matter but big if you are into these things: the Jim Thome card is no longer available in set 2.1 (or is this 2.2?). I was at the game tonight (Monday) and picked up a set with Thome on top at the Authentics store. Only one pack had him in it--the rest did not. I figured they must have been clearing out some of the version 2.0 sets there and I wanted a second set with Thome so I went to a newsstand. They didn't have Thome, and the woman working there said "Those were supposed to only be sold that weekend." She called the other stands and no one had one available. So I don't know that I would consider that card to be part of the update set, or at least maybe note that it was only temporarily available. I'm glad at least I got one....