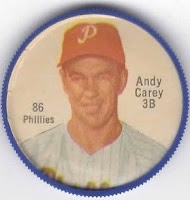 On December 15, 1961, Carey (along with Frank Barnes) was traded by the White Sox to the Phillies for Taylor Phillips and Bob Sadowski.  Carey refused to report to the Phillies in March 1962, as he preferred not to spend his final year in baseball on the last place Phillies and he intended to focus full-time on his growing California brokerage business.  The Phils received Cal McLish from the White Sox as consolation for Carey's refusal to report, and Carey was eventually swapped to the Dodgers where he finished his career closer to home.

For Phillies collectors, Carey is included within the 1962 Salada-Junket coin set, marking his only appearance with the team on any collectibles.  The set's creators originally released the Carey coin featuring him in a White Sox uniform, but the photo was updated to feature him in the Phillies hat and uniform he'd never actually wear.
Posted by Jim at 7:00 AM

Email ThisBlogThis!Share to TwitterShare to FacebookShare to Pinterest
Labels: 1962, Carey

Thanks! One of my all-time favorite Yankees. Nice reminder.