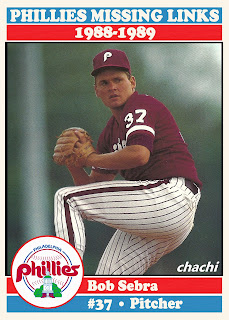 Bob Sebra is the one player on this Missing Links list that I'm surprised to see here.  In my mind, Sebra was with the Phillies for much longer than the nine games indicated by his Baseball Reference page.  The right-handed pitcher was acquired from the Expos on September 1, 1988 and he'd start three games for the Phillies in that final month of the season.

Sebra joined the club in Clearwater for spring training in 1989 and he started the season with Triple-A Scranton/Wilkes-Barre.  Recalled on May 18th, Sebra was around when the Phillies started a massive overhaul of their roster that began when Mike Schmidt announced his retirement on May 29th.  Within a  month, key cogs Chris James, Steve Bedrosian and Juan Samuel were all traded away.  Sebra was one of a few players sent back down to Triple-A to make room for the new players acquired from the Giants and Mets in the Bedrosian and Samuel trades.  A few weeks later, Sebra himself was dealt away to the Reds.

There you go, mentioning that Juan Samuel trade again...

...Until I went to his Trading Card DB page and saw all the Nationally-issued minor league cards of his that I own... 1989 Pro Cards, 1990 CMC, 1992 SkyBox. He played at the right time to get maximum exposure on "pre-rookie" cards.


BOB SEBRA DEPARTED THE SCENE ON WEDNESDAY 22 JULY 2020 - HE HAD BEEN IN ICU AT JACKSON MEMORIAL HOSPITAL FOR MORE THAN A YEAR WHILE UNSUCCESSFUL EFFORTS WERE MADE TO PROLONG HIS LIFE. - REMEMBRANCE -.