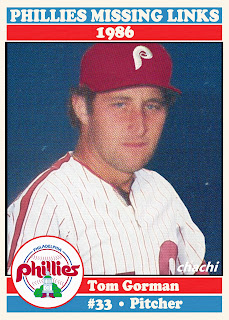 The season before he had eight relief appearances with the Phillies, Tom Gorman was on the other end of one of the most memorable games in Phillies history.  Gorman was the starting pitcher for the Mets on June 11, 1985, lasting a third of an inning and allowing six runs including the first of two Von Hayes home runs hit in the first inning.  The Phillies would go on to win the game 26-7.

Gorman was released by the Mets at the end of spring training in 1986, and signed a few weeks later with the Phillies.  He'd spend the bulk of the 1986 season pitching for the Triple-A Portland Beavers, but he'd get the call to the Phillies in early July when the struggling Mike Maddux was sent down.  Gorman struggled in his eight outings and he was sent back to Portland in early August, replaced on the roster by Michael Jackson who would soon make his big league debut and assume Gorman's #33.

Gorman finished out the season in Portland and was released following the 1986 season.

I first attempted a Phillies card for Gorman using the photo from his 1986 ProCards Portland Beavers card a few years ago.  This original card can be found here.

After the beat-down the Phillies (and Von Hayes) gave him in that one game, I was shocked they had signed him. Then again, the mid-80's Phillies pitching staffs weren't exactly setting the world on fire.