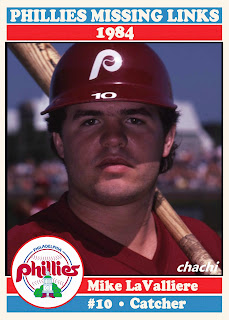 By the time Mike LaValliere was Major League ready for the Phillies, Ozzie Virgil had inserted himself as the team's everyday catcher with John Russell and Darren Daulton waiting in the wings. LaValliere was a September call-up in 1984, appearing in six games and starting only two.

"Spanky" found much more success with the Pirates, winning a Gold Glove in 1987 and helping them win the N.L. East pennant in 1990, 1991 and 1992.  He would later speak of his desire to exact revenge against his first team for letting him go following the 1984 season.  During his years with the Cardinals and Pirates, LaValliere hit .303 (70 for 231) with four home runs against the Phillies including a blast against Kevin Gross on June 19, 1986 in his first meeting against his original team.

Phillies Career
6 games, 0 for 7
Acquired:  Via free agency
Debut:  September 9, 1984 - Entered in the bottom of the 10th inning as the Phillies catcher, replacing Virgil who had been pinch-run for in the top of the inning.
Final Game:  September 30, 1984
Departed:  Signed as a free agent with the St. Louis Cardinals, January 23, 1985

Spanky was a popular Reading Phillie, and I remember being disappointed he was traded. But Ozzie Virgil had a solid 1984 and was about to become an All-Star in 1985 (as it turned out), so it was going to be hard for him to crack the line-up.

Weird goings on that winter for Lavalliere, which I didn't remember, per BB Ref: