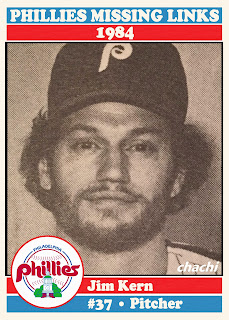 Over 30 years ago when I read in the transaction column of our newspaper that the Phillies hadJim Kern, I knew exactly what Kern looked like thanks to his many fantastic baseball cards. Kern had been a three-time All-Star with the Indians and Rangers in the late 1970s, and I had long admired his colorful baseball cards, some featuring him with a semi-maniacal grin.

Kern was signed by the Phillies on June 3rd, the day after they placed Tug McGraw on the 21-day disabled list with shoulder soreness.  The hirsute righty reliever had been unemployed since being released by the White Sox on March 1st.

With the Phillies, Kern appeared in eight games, allowing 15 earned runs on 20 hits and 11 walks in 13 1/3 innings for a 10.13 ERA.  If you remove his dreadful first appearance (see box score), his Phillies stats become slightly more respectable - 6.57 ERA, 13 hits and 9 runs in 12 1/3 innings.  When McGraw was activated from the disabled list on July 27th, the Phis released Kern.

Sources:  Thanks to Friend O' the Blog Steve F. for the photo of Kern from a 1984 Phillies program! Baseball Reference and The Trading Card Database