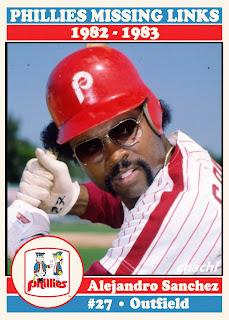 In his profile in the Phillies 1984 Media Guide, it's noted that Alejandro Sanchez "physically resembles Pedro Guerrero."  The outfielder was a September call-up in 1982 and he made the Phillies opening day roster in 1983 due to Von Hayes' thigh injury.  He'd be sent down to Triple-A Portland when Hayes returned in mid-April and he wouldn't return to the Phillies until rosters expanded in September.  On March 24, 1984, Sanchez was traded to the San Francisco Giants for Dave Bergman and the Phils would flip Bergman that same day to the Tigers with Willie Hernandez for Glenn Wilson and John Wockenfuss.

I had previously created a card for Sanchez using the 1982 Topps design and his picture from the 1982 Phillies Yearbook.