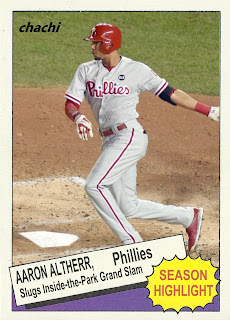 One Sentence Summary:  Aaron Altherr and Jerad Eickhoff starred in this 8-2 victory over the free-falling Nationals.

What It Means:  With a Phillies win or a Mets win today, the Nationals will be officially eliminated from the postseason.  (I actually smiled writing that.)

What Happened:  It was the Altherr and Eickhoff show.  Eickhoff pitched seven strong innings, allowing two runs on five hits while striking out 10.  Eickhoff struck out Bryce Harper three times in the game, joining Matt Harvey, Clayton Kershaw and Madison Bumgarner as the only pitchers this season to accomplish that feat.

Altherr hit an inside-the-park grand slam in the third, a solo home run in the fifth and stroked a double in the seventh.  He finished the night having gone 4 for 5 with 5 RBIs.  Darin Ruf (10) and Cody Asche (12) also homered in the winning effort.

Featured Card:  Altherr's historic run around the bases took 14 seconds and was made possible by an ill-advised diving attempt on the ball by Nationals center fielder Michael Taylor.  Taylor missed the ball and it rolled all the way to the warning track.  It was the first inside-the-park grand slam for a Phillies player since Ted Kazanski did it on August 8, 1956.  When he hit his out-of-the-park home run in the fifth, Altherr became the first Phillies player since Willie "Puddin' Head" Jones to hit an inside-the-park grand slam and a "normal" home run in the same game since Jones did it on June 19, 1951.
Posted by Jim at 5:00 PM

I find it interesting that more than a couple of Phillies and Braves fans I know were happy to see the Nats sinking into the sunset. It's one thing if they'd been dominant for years and people disliked them, but they've not gotten past the NLDS in their two trips, and their still disliked more than a team from New York. That says a lot.

Jonathan Papelbon is the biggest reason why I'm grateful that the Nationals won't be playing in October. And it's tough for this lifelong Phillies fan to say this . . . but the Mets are actually likable this year, unlike the Nats.