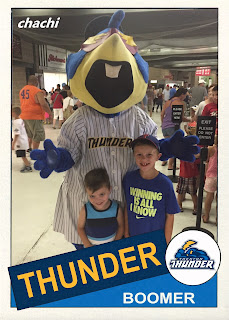 One Sentence Summary:  Chase Utley homered and doubled in the game, but Justin De Fratus couldn't keep the Brewers off the board in the seventh as the Phillies eventually lost, 4-2.

What It Means:  The Phillies have lost four of their last five after a modest hot streak following the All-Star break.

What Happened:  Utley raised his average to .213 and he's now hitting .500 (13 for 26) with five doubles since his return from the disabled list last week.  Sloppy play (Cody Asche and Jeff Francoeur both committed errors) and mental mistakes (Luis Garcia opted not to throw a runner out at second in the eighth) led to most of the Brewers runs.

Featured Cards/Field Report:  We decided to venture northwards to Trenton last night and pay our first visit to Arm & Hammer Park (formerly Mercer County Waterfront Park) to watch the visiting Reading Fightin Phils take on the home Trenton Thunder.  The Thunder are the Double-A affiliate of the Yankees, and I was very surprised that there were way more Phillies fans in attendance last night than Yankees fans.  (Or maybe the Phillies fans were just more vocal.)

We got our first look at the newly acquired Nick Williams (2 for 4 with 2 RBIs) and starting pitcher Jake Thompson (6 innings, 2 hits, 2 runs, 5 strikeouts) who were both still in the Rangers organization for our last Reading game.  We were also really impressed with catcher Andrew Knapp who went 1 for 4 and threw out three would be base stealers.  Knapp is hitting .405 in 38 games since being recallsed from Clearwater.  Third baseman Angelo Mora had a pair of hits and scored twice while closer Stephen Shackleford recorded his franchise high 27th save in the 4-2 Fightin Phils win.

Our boys got the chance to meet the Thunder's mascot Boomer, who is . . . some sort of yellow and purple something with sunglasses.  The boys also enjoyed watching Derby serve as the Thunder's bat dog.  Derby dutifully retrieved Thunder players' bats from the home plate area during the early innings of the game.  It was a fun night and we'll be checking the schedule next season to see when the Fightin Phils are back in Trenton. 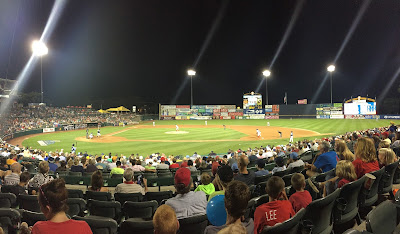 I had to Google for other pictures of Boomer to get a better sense of what kind of "something" it is. I thought it might look less strange from another angle, but I can see it's just all-around bizarre.

I suppose the guy who considers the Phillie Phanatic to be the greatest mascot of all time shouldn't go throwing stones at unrecognizable costumed creatures . . . but still. It's weird.