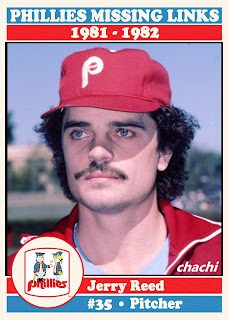 Of the three players the Phillies traded to the Indians in mid-September 1982 for John Denny, Jerry Reed was the only one with Major League experience.  Drafted by the Phillies in 1977, Reed was a September call-up in 1981.  He'd appear in four games that season and he'd get the call again in August 1982 when Porfi Altamirano was sent down to Triple-A Oklahoma City.  Reed would appear in seven more games for the Phils before his trade to Cleveland.

Reed enjoyed a nine-season big league career, pitching mostly in middle relief but occasionally closing.  Perhaps his best season was with the Mariners in 1987, when he went 1-2 with a 3.42 ERA and 7 saves in 81 2/3 innings pitched.

Using a photo from the 1981 Phillies Yearbook, I had previously created a card for Reed in the style of the 1982 Topps set.  That card can be found here.  I decided to try to use different photos for this new set (where possible) and I liked this photo of Reed, which I had never seen before.

Another winner! I have never seen that photo of Reed before.