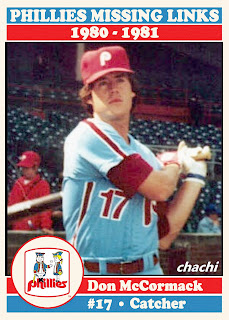 Don McCormack was drafted by the Phillies in the 4th round of the 1974 amateur draft.  With Bob Boone as the team's regular catcher and both Keith Moreland and Ozzie Virgil passing McCormack on the organizational depth chart, he appeared in only five games with the Phillies - all as a September call-up.

After his playing days were over, McCormack came back to the Phillies organization managing the Batavia Clippers (Rookie A, 1988-1989) the Reading Phillies (AA, 1990-1993) and the Clearwater Phillies (High A, 1994-1995).  McCormack most recently managed the Long Island Ducks in the independent Atlantic League between 2001 and 2006.

Agreed--nice-looking cards! I had forgotten about your 1980 and 1981 versions, which also look excellent.

I saw the name Don McCormack and I thought "didn't he used to manage the R-Phils?" Glad to see my memory isn't failing me (this particular time).