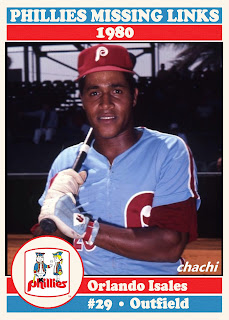 Islaes had the misfortune of being a prospect in the Phillies system at a time when the Major League club was playing particularly well.  Signed at the age of 15, Isales climbed through the minors and was recalled when rosters expanded in September 1980.  On the final regular season game of the 1980 season, Isales was in the starting line-up, batting third and playing right field.  It would be the final game of his Major League career.  Baseball Reference indicates that Isales wore both #28 and #29 during his very brief time in the Majors.

The first card above, created in the style of the 1980 Topps set, was an earlier attempt of mine to create a Phillies baseball card of Isales.  The photo used is from the 1980 Phillies Yearbook and it just doesn't work that well with the team banner cutting across Isales' chin.

Thanks! I wanted something I could re-use for the '90s and '00s by changing up the color schemes, font and Phillies logo.

Agreed--it's a nice look. It gives me the vibes of where Hostess cards would have gone had they stuck around a few more years.

I remember Isales as a Reading Phillie in 1978, and I am pretty sure I have his autograph on a program and maybe in an autograph book (remember those?). I wonder if he was given a World Series ring. If Adam Eaton got one after actively dragging the Phillies down in 2008, Isales should have, even doing basically nothing. Wait, what am I saying? He had the highest OPS on the team (1.300--that's even above than Barry Bonds territory!) for players with more than one plate appearance. The overall leader was pitcher Scott Munninghoff at 4.00--he tripled in his only at-bat.

Not sure about Isales and a ring, but I did recently read that Steve Comer got a 1983 N.L. Champs ring from the Phillies.

How a can buy this card?

I'm looking for one baseball shrit with his #28 or #29 I'm not sure of the number, Does anyone know where I can purchase Orlando Isales baseball shirt?

Do you still have these cards. He lives mear me Incould use a few to get them signed and if you want I can sign a few for you as well.