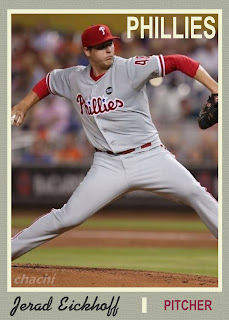 One Sentence Summary:  Jerad Eickhoff was impressive in his Major League debut, pitching six shutout innings and adding a two-run single in the fourth in the 7-1 Phillies win.

What Happened:  Eickhoff struck out five and allowed five hits in his first outing.  Ryan Howard had three doubles and drove in a pair of runs.  Cameron Rupp made an outstanding defensive play at the plate, leaping to catch an errant throw from Freddy Galvis and tagging out Marlins baserunner Justin Bour to end a scoring threat in the fourth.

Featured Card:  We here at The Phillies Room are doing our best to keep moving forward with an eye to the future.  I don't have any Eickhoff minor league cards in my collection, so I went ahead and created a 2016 Chachi Preview card for the rookie pitcher.  His 2015 Chachi card will debut in a separate post.  If you can't wait until that post, you can check it out over on the updated 2015 Virtual Phillies Wall.
Posted by Jim at 9:30 AM

If you didn't notice, Mike Fiers no-hit the Dodgers last night, and the last three outs were made by Rollins, Utley and Justin Turner... Two former Phillies and a former Met. That says something, but I'm not sure what.

We watched the end of that no-hitter and I thought for sure Utley would break it up.