One Sentence Summary:  In what could possibly be his last start with the Phillies, Cole Hamels threw the the 13th no-hitter in team history as the Phillies won against the Cubs, 5-0.

What It Means:  Little did I know I'd witness history when I began working in our yard and mowing our lawn yesterday afternoon.  Listening to the radio broadcast of the game the entire time, I finished up after the fifth inning and sat in our garage to listen to the sixth and seventh innings.  I decided I didn't want to be exiled in the garage in case history was made, so I got over any lingering superstitions and went inside to watch the final two outs on TV with my family.

As Hamels collected the final outs he needed, my oldest son Doug could barely contain himself and my youngest son Ben wondered what all the commotion was about.  We jumped and screamed and clapped as Odubel Herrera somehow caught the final out of the game in center to preserve the no-hitter.  If this was in fact Hamels' last game as a Phillie, he gave us all a wonderful parting gift and a fantastic memory that I'll never forget.

What Happened:  Hamels struck out 13 and threw 129 pitches.  His only blemishes on the day were two walks allowed to Dexter Fowler.  Ryan Howard's three-run home run in the third gave Hamels all the run support he'd need.  The Phils scored twice more in the eighth when Cody Asche singled and Freddy Galvis blooped a double to the outfield grass behind first base.  Anthony Rizzo fielded the ball and immediately threw it beyond third, allowing Galvis to come around to score.

Featured Cards:  Hamels gets the main Highlight card here, but I also wanted to work in a Highlight card for Herrera and a Record Breaker card for Carlos Ruiz.  I was going to go with a few dreaded short-printed variation cards to accomplish this, but then I decided to just add three cards to the main set.  (Years from now, when set collectors are trying to put together their 2015 Chachi sets, they'll thank me for this.)

Ruiz joins Jason Varitek as the only catchers in Major League history to have caught four no-hitters and he becomes the only National League catcher to have accomplished this feat.  I also love the picture below capturing the moment after Herrera's grab when Ruiz and Howard were the first to greet Hamels on the mound.  Chase Utley (currently on the disabled list, but in Chicago) joined the trio a few seconds later.

Herrera's circus catch to record the 27th out preserved the no-hitter and he also made a nice play on a David Ross liner in the eighth for the second out of that inning. 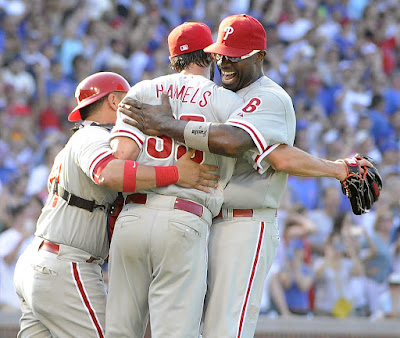 I envy your elation. I kindly request that you guys knock off this whole embarrassing the Cubs thing. :P

The only other team's hat I've worn regularly in my lifetime is a Cubs hat during the years Bobby Dernier roamed center at Wrigley. If Hamels has to go somewhere, I'd love to see him in Chicago and I may have to break out my old Cubs hat.

I envy your continued enthusiasm. I have had difficulty maintaining interest in the current Phils since the playoffs stopped (or maybe since I gave up my season tickets after 2013). This is the second Phillies no-hitter of the last 12 months that I have only caught the last 3 outs of. On the other hand, I attended Terry Mulholland's and watched Kevin Millwood's and both of Roy Halladay's; I suppose my interest will return in one of two ways: (1) once the Phils recognize they have a problem and put in place a new leadership team to address it (which seemingly may happen after this season ends, but has not happened yet); or (2) once my soul is so crushed by the losing that I take it as the norm, and I am not there yet.

Anyway, alerted by my iPhone's MLB.com app, I did tune in to catch the ninth inning with my son and one of my daughters while we were finishing dinner on the patio. And there was some enthusiasm. But then I said, "Well, we'll probably never see him in a Phillies uniform again, so enjoy," and that Debbie Downer comment took all the joy out of the room. D'ohhh!

All I can say is that Ruben had better not put his anti-Midas touch on this trade like he did in trading away Cliff Lee, Hunter Pence and Shane Victorino. We got no impact players in return, while they have three post-Phils WS rings among them. Only Lee doesn't have one, and that's because he returned to the Phils. My fear is that we trade with the Dodgers or Rangers and get two or three guys who are rated in the 70s or lower among the Baseball America top 100 prospects because the Phillies scouts saw the eye of the tiger in them.

I believe the decision making break-down on any future Phillies trades is as follows: