Number of Cards:  40
Card Size:  4" x 6"
Description:  Keeping with a theme that's been used for the past two seasons, the card fronts feature full color photos with a bottom border containing the player's name, number and position.  The blue border used for the first series set has been replaced by a red border and a simple Phillies "P".  The horizontal card backs feature biographical information and complete career statistics.

How Distributed:  The second series set went on sale at Citizens Bank Park on June 2, 2015.  Sets are available for sale for $5.

Complete Standard Checklist:  The cards are unnumbered, but I've presented them below ordered by uniform number.

I wouldn't be surprised if Araujo, McGowan and O'Sullivan get bumped from the First Appearances designation up to the One and Done spot.  The younger Araujo has the best chance of receiving a second Phillies baseball card.  Asche's card designates him as a left fielder, despite the fact he had only played three career games at the position prior to this set's release.  Sizemore was released the day before this set was released.

Brown is in the set even though as of the set's release date he had yet to appear in a game with the Phillies in 2015.  Brown has been exiled to Triple-A Lehigh Valley thus far into the season.

The second series replaces the Charlie Manuel alumni card (found within the first series) with an alumni card for this year's Wall of Fame inductee Burrell.

Variations/Rarities:  On July 31st, I purchased a second series photo card set from the ballpark that included an Aaron Nola card on top.  The rest of the cards in the set were the same 40 cards as listed on the checklist above.

Update (6/13/16):  Fellow collector Steve F. obtained an Aaron Altherr card in the style of this set at the 2016 ALS Festival held on June 9, 2016. The card is blank-backed and was most likely printed solely in order for Altherr to have a card for autograph requests.  Collector Rick also informed me that blank backed cards are available for Franco and Rupp.

Update (9/16/16):  Fellow collector Rick e-mailed me on September 16th to let me know that blank-backed photo cards in the style of this set were available to Jr. Phillies Club members during the game.  From the scans sent by Rick, I've listed below the additional cards available through this promotion. 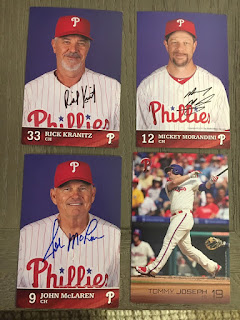 Update (12/15/18): At the recent Phillies holiday sale, an annual event held at Citizens Bank Park, Steve found even more rare versions of cards in this set's style.  These three coaches joined the staff in 2016, so presumably these cards were produced during the 2015-2016 offseason.
Trivia:  As I laid out in this post, this is the earliest a second series set has ever been released since the team started issuing multiple team issued sets back in 2010.  Hector Neris and Severino Gonzalez are the only members (so far) of the 2015 Phillies not to appear in either series of team issued sets.

Resources:  Thanks to fellow Phillies collectors Steve F. and Rick for giving me a head's up that this set was for sale at the ballpark.
Posted by Jim at 7:00 AM

With it being released this early, hopefully there is a series 3! Also, note that the Burrell card has a copyright 2008 on it but t references the fact that he is the 2015 Wall of Fame inductee. I suppose the copyright applies to the photo.

Series 3, aka the series featuring mostly IronPigs and the guys we get for Hamels, Harang, Papelbon, Ruiz, etc.

I should also note that Kevin Correia now needs a team issued card.

I would think set #3 is on its way. With Sandberg out and Nola on the way, they could at least add a few cards and pull the cards of the departed. I'm hoping they go with a whole new set, as it's probably the only chance we'll have at a Pete Mackanin manager card.

I've updated this post to include the Nola card now included with the set as of July 31st.

..and to complicate things further the Phillies have started putting the copyright date on the back of the alumni cards for the year the photo was taken (i.e. Manuel 2008 copyright when he was still managing team). They used to copyright when the card was issued so it will become increasingly difficult to catalogue an alumni card by year.