One Sentence Summary:  Adam Morgan was stellar in his Major League debut and the offense came to life in a 9-2 Phillies win over the Cardinals.

What It Means:  The Phillies will try to win two in a row when they open a series against the Yankees in the Bronx tonight.

What Happened:  Morgan allowed a run and struck out six in his 5 2/3 innings of work.  Maikel Franco and Ben Revere each had three hits and Andres Blanco added a three-run pinch-hit home run in the seventh.  Cesar Hernandez had perhaps the biggest hit in this game, lacing a line drive single to right with two outs in the second that gave the Phillies a 3-0 lead.

Featured Cards:  Four of the nine Morgan baseball cards in my collection (to date) feature him with the Lehigh Valley IronPigs, including this card from the 2013 Topps Heritage Minor League set.

Bonus Beatles-Related Content:  Since my Mom first gave me her copy of the White Album when I was a wee lad, I've been a huge Beatles fan.  Some of my family and friends would argue that "huge" is a bit of an understatement as I've voraciously listened to all the music, read all the books and followed each of the Beatles' solo careers faithfully.  If you're interested, I recently put together a playlist in iTunes with Ringo Starr's 50 greatest solo songs (1970-2015).  But I digress.

On Sunday night, my wife and my two sons enjoyed Paul McCartney's concert at the Wells Fargo Center in Philadelphia.  It was my fourth time seeing Paul live (1989, 2005, 2010 and now 2015) and it was an amazing show.  Our youngest son Ben tired quickly and napped throughout most of the show while our oldest son Doug clapped and sang and shouted every few songs, "This is AWESOME!"  A splendid time was indeed had by all. 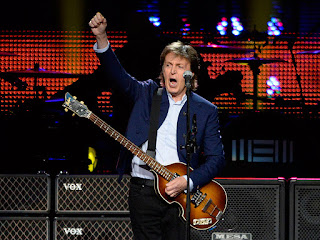 Email ThisBlogThis!Share to TwitterShare to FacebookShare to Pinterest
Labels: 1964, 2013, 2014, Beatles, Morgan A.

Wow, sounds like a great show... You may officially count me among the jealous.

I didn't realize that you were that big of a Beatles fan. I love the Beatles, but I don't think I could even name 50 Ringo songs...

Let the Ringo Love in!

I'm a big Beatles fan too, and I saw Paul in 2010. I was planning to see him this year too but we were at the shore and I wasn't sure I wanted to drive back Sunday night for the show. The decisions was made easier for me when it sold out in a very short time and ticket prices on StubHub were through the roof. I wish I had gone though. I did see his fellow septuagenarian Brian Wilson 8 days later (for the 4th time) and lucked into a front row seat because, as I was told at the ticket office after my original ticket was rejected, "The artist needed you seats and ones next to it, so you have been moved to the front row." Lucky break for me!

Oh yeah--Ringo is playing locally on October 30 with Todd Rundgren in his band. That should be a great show! Maybe I will see you there.

I would have loved to have seen Brian Wilson.

We're on the fence for the Ringo show as it could interfere with Halloween/trick or treating plans.