One Sentence Summary:  In his first (and perhaps last) big league start, Phillippe Aumont struggled mightily and the Cardinals notched an easy 12-4 win.

What It Means:  Aumont was making a spot start to give Cole Hamels' hamstring an extra day of rest.  He lasted four innings, allowing six runs on five hits and seven walks.  He most likely will not be starting another game for the Phillies anytime soon.

What Happened:  The Phillies and Cardinals wore retro uniforms from the 1960s in this game.  Other than the cool retro jerseys and an incident with a squirrel on the field, this game should be quickly forgotten.

Featured Card:  The Phillies chose to wear uniforms from their 1969 season, as evidenced by the MLB patch on the left shoulder celebrating the league's 100th year.  I don't think there's a good baseball card from the era showing a Phillies player in a home jersey with the patch, so I went with this card of Rick Joseph in an away jersey which clearly shows it off.

Transaction:  Hector Neris was sent back to Lehigh Valley after just one game to make room on the roster for Aumont. 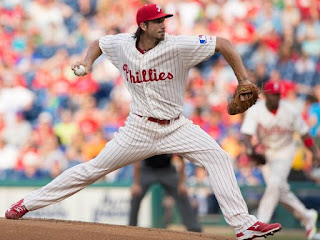