One Sentence Summary:  Chad Bettis silenced the Phillies bats, taking a no-hitter into the eighth inning, as the Phillies easily folded to the Rockies, 4-1.

What It Means:  This game's only significance was the debut of opening day third baseman Cody Asche in left field.

What Happened:  Bettis lost his no-hit bid in the eighth when Asche singled up the middle.  Cole Hamels was the hard luck loser, as he allowed only two runs and struck out nine in his eight innings of work. 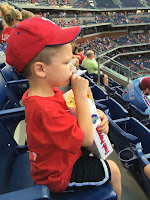 Featured Card:  In honor of my youngest son Ben, I had to go with a card for Ben Revere even though the right fielder went 0 for 4 last night.  (See Field Report below.)

Transaction:  Asche was recalled from Lehigh Valley prior to the game and veteran outfielder Grady Sizemore was designated for assignment.  Sizemore could end up reporting to Lehigh Valley.

Field Report:  We had tickets to last night's game and I decided it would be a great opportunity to take my five-year-old son Ben since the Phillies were giving away a Phanatic reading book to all kids.  Ben was excited about the game too . . . but only if his mother took him.

So like a true champ, my wife Jenna pinch-hit for me and I'm happy to report they had a wonderful time.  Ben cheered on his two favorite players (Revere, naturally, and Chase Utley) and spent the bulk of the game in the Phanatic Phun Zone.
Posted by Jim at 9:00 AM

Email ThisBlogThis!Share to TwitterShare to FacebookShare to Pinterest
Labels: 2015, Revere