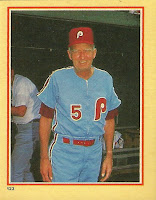 One Sentence Summary:  The six-game winning streak came to an end as Nick Hundley hit a go-ahead home run in the eighth off Justin De Fratus leading to the 6-5 Phillies loss.

What It Means:  The once reliable bullpen has been shaky in 2015.  The Philllies tied the game at five in the top of the eighth on a two-run single from Maikel Franco, but it was all for naught.

What Happened:  Aaron Harang had his roughest start of the year, allowing three first inning runs although they were all unearned as a result of a costly error by Franco.  Making up for his earlier miscue, Franco's big hit in the eighth capped a three hit, three RBI night.

Featured Card:  I'm a little behind in posting this week so I haven't had a chance to comment on the Marlins naming their former GM Dan Jennings as their new manager.  I was actually surprised that such a big deal was made of this hiring since the Phillies had already done this twice before in the past forty-plus years.

Phillies GM Paul Owens took over for Frank Lucchesi in July 1972 and assumed the manager's duties again in 1983 when he fired Pat Corrales (while the Phillies were in first place!) and stuck around throughout the 1984 season.  Owens led the Wheeze Kids to the 1983 World Series and only time will tell if Jennings will have the same success.

Transaction:  Reliever Hector Neris was optioned back to Lehigh Valley following this game to make room for Wednesday's starting pitcher Severino Gonzalez, who was recalled.
Posted by Jim at 10:00 AM