It looks as if I skipped going through this exercise last year, but I've always enjoyed seeing how Topps matches up cards in its Heritage releases to the cards to be found in their original sets.  I've put together a table below that compares the Phillies related cards to be found in the 2015 Topps Heritage set with their 1966 Topps counterparts and vice versa.  I've listed below links to my posts looking at the 2012 and 2013 Topps Heritage sets. 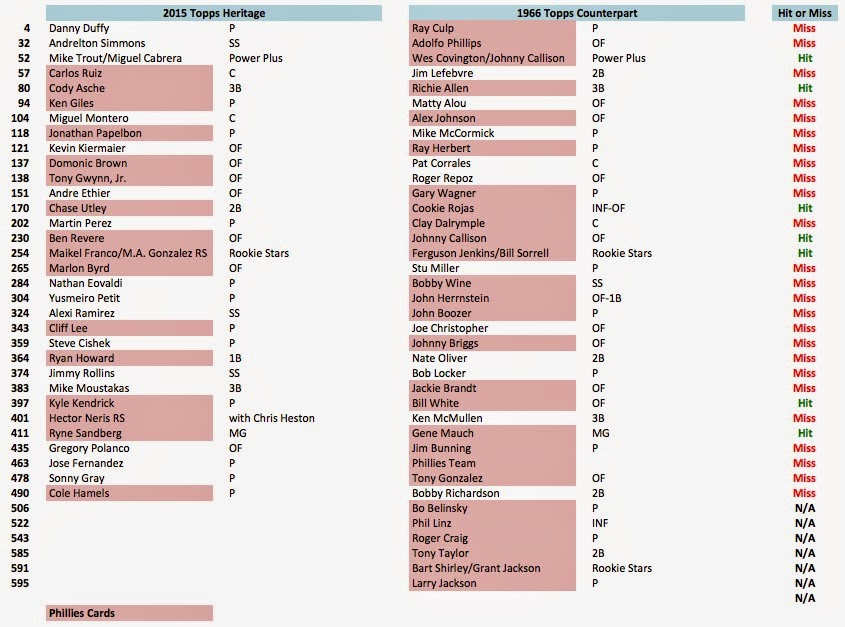 The number of "hits" decreased again in 2015, with only 7 Phillies cards from the 2015 Topps Heritage set having clear and logical counterparts in the original 1966 Topps set.  I assigned a "Hit" to card #52 in each set as both sets feature two power hitters in a "Power Plus" multi-player card.  Unfortunately, there just wasn't a logical or meaningful choice of Phillies players to use for this card given the team's declining offense in 2014.

It would be impossible to match up every card in a Heritage set, due to modern expansion and the smaller size of the modern Heritage sets, but I'd love to see Topps return to the days of at least trying to match up more cards.  In the earlier days of the Hertiage sets, Topps would have used a close cropped head shot of Chase Utley to better approximate Cookie Rojas' card in the original set.  They also would have come up with more similar poses to the older set than the crossed arm pose that is ubiquitous in the new Heritage set.

The average collector will never notice stuff like this, but if I worked for Topps you know I would have made sure the "M" in manager was capitalized on Ryne Sandberg's card in order to more closely approximate the original version.  It also bums me out that the Phillies didn't receive a team card in the 2015 Topps Hertiage set.

If and when time permits, I'd like to go back through all the Topps Heritage sets to see which sets have the highest number of matches.