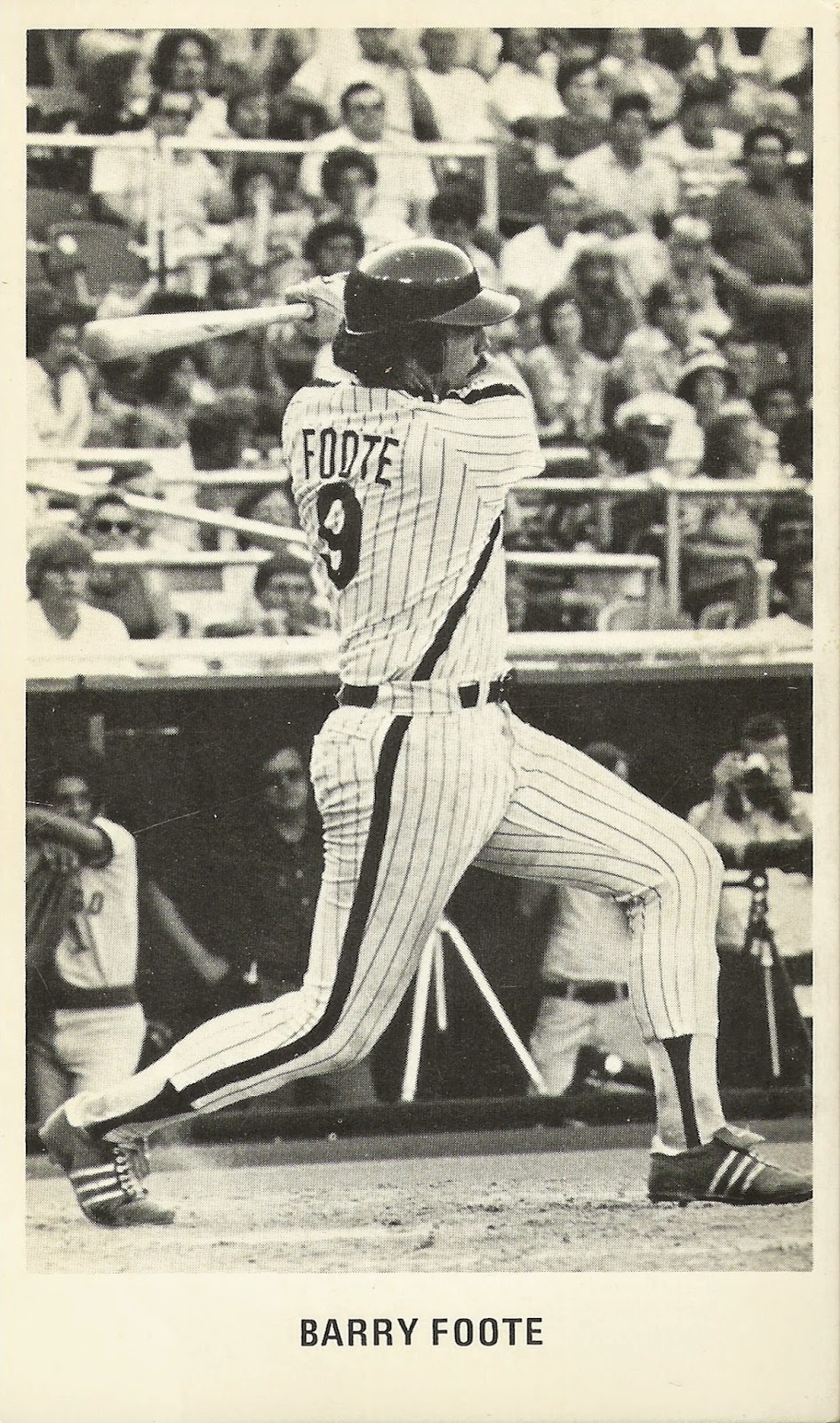 Number of Cards:  33
Card Size:  3 1/4" x 5 1/2"
Description:  As was the case with all Phillies photocards issued throughout the 1970s, these cards feature a black and white photo with the players' name below.  The backs of the cards are blank and there's no indication on the cards themselves that they're from 1978.  Some of the cards contain blue facsimile autographs, as noted on the checklist below.  Tug McGraw's card features a rare horizontal format to fit his post wind-up photo.

I actually get disappointed now when there's not someone with a One and Done card in these sets.  The First Appearance designation is for players who have never before appeared within a Phillies team issued set.  These players may have already appeared on other Phillies baseball cards.

Variations/Rarities:  As Rick points out in his comment below, there are three variations to be found within this set.  Note that these aren't necessarily rarities as I'm not sure which version of each player's card is more prevalent.
Finally, while not part of the team issued set per se, there is a 1978 color postcard of the Phillie Phanatic that was issued by Harrison/Ericsson.  I'm not including it as part of the main checklist above but it should be noted that the card does exist.  (The same note pertains to the 1980 and 1981 team issued sets.)

Also See:  1978 Phillies Spring Training and 1978 SSPC Baseball the Phillies Way - Part One and Part Two.
Trivia:  The Beckett database has no record of this set.  Bob Boone's card uses the same photo as his 1977 photocard, but with a slightly different autograph placement.
Resources:  The Trading Card Database; Phillies collectors Steve and Rick (@rickphils)
Posted by Jim at 7:00 AM

There are two Mike Schmidt cards-identical except one has a facsimile. There are two Tim McCarver cards-one action of him swinging, one portrait. Tug McGraw also has two-one portrait, one is horizontal of him pitching.

I also have the Phillie Phanatic on my list, but I haven't ever seen it. I am not sure where I saw it listed to have added it there. I do know there was a color postcard of him from 1978, so maybe that's it? Rick, any idea?

There is a 1978 color postcard of the Phanatic by Harrison/Ericsson (also a black and white 1980 and 1981 by same ? company). I don't know if it was team issued or not but definitely these are different from the standard team issues of the 1970's-1982

Thanks again Rick. I've updated the post for the three variations.

As I mentioned in the 1980 post, I would propose including the Phanatic card as a variation/rarity. Harrison/Ericsson created the Phanatic, and I would presume that the Phillies were involved in creating and/or distributing those Phanatic postcards, even if they are in a slightly different format.

Thanks Steve. I've added a note for the Phanatic card.