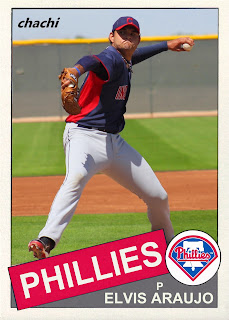 It's come to this.  The first addition to the Phillies 40-man roster this offseason is 23-year-old left-handed reliever Elvis Araujo.  This is what passes for big news these days for the Phillies, as they're now officially looking to unload anyone and everyone in an effort to finally start the rebuilding process.  Araujo joins a stable of young, cheap relievers who could possibly see action out the club's bullpen in 2015.

Araujo has pitched in the Indians organization since 2008 (as a 16-year-old) and between High A and Double-A last year, he went 2-1 in 43 games with a 3.42 ERA and 11 saves.  You're in luck if you're trying to track down a baseball card of the newest Phillie, as Araujo was featured in the 2014 Bowman Chrome Prospects set.  He'll most likely compete for a bullpen job out of spring training, but I'd expect to see him begin the season in the minors.

In other news, the Phillies invited their first seven players to spring training as non-roster invitees, and I'll feature those guys in a separate post.

Coming Back
Andres Blanco (11/13/14) - Signed to a minor league contract and invited to spring training.

New Additions
Elvis Araujo (11/13/14) - Signed as a free agent formerly with the Cleveland Indians organization.
Posted by Jim at 7:00 AM

I was reading through the transactions and was very surprised that I had never heard of Araujo, but the Phils gave a big league deal. However I had heard of all 7 of the guys that got minor league deals. I guess this is just the next step in the process of potential taking over for actual results in baseball.

I think you're right.