The timing of this post is fitting as my oldest son Doug recently brought home a complete 2012 Topps factory set.  The cards are currently strewn about our dining room table in various stacks as he's slowly sorting and putting the set in order.

I wasn't overly thrilled when this set was first released, and I had no real emotional ties to it.  But the cool thing is . . . my son will.  He loves this set.  He's learning the players and showing me the cards he finds cool and asking me questions.  This set to him is what the 1979 Topps set was to me . . . already an "old" set when I discovered it, and therefore slightly mysterious and definitely awesome.

The Set
Number of cards in the set:  There are 660 regular cards to be found in the first and second series, with card #661 of rookie Bryce Harper added as a short-print and included within the factory set.  Before researching for this post, I didn't realize there are actual four different variations of the Harper card.  The update series added 330 cards.
My very brief thoughts on the set:  I wrote about my initial thoughts on the 2012 Topps set upon opening my first packs in February 2012.  Given my son's new found love for this set means that it now also holds special meaning to me as well.

2012 Phillies
Record and finish:  Cracks in the Phillies armor first started showing this season, and they'd finish at an even 81-81 and in third place in the N.L. East.  Their undoing was a miserable month of June in which they went 9-19.  The Phils would miss the playoffs for the first time since 2006, and they haven't been back since.

Key players:  Injuries cut the seasons of Ryan Howard, Chase Utley, Placido Polanco and Carlos Ruiz short and it speaks volumes that the most consistent hitter throughout the season was the veteran outfielder Juan Pierre.  The Phillies traded two-thirds of their starting outfield at the July non-waiver trade deadline, shipping Shane Victorino to the Dodgers and Hunter Pence to the Giants.  Domonic Brown and John Mayberry, Jr. assumed starting roles for the remainder of the season.  Jimmy Rollins led the team in home runs (23) and tied Ruiz for the team lead in RBIs (68).

On the mound, Cole Hamels was outstanding, winning 17 games and pitching to a 3.05 ERA.  Cliff Lee also turned in another fine season, owning a 3.16 ERA in 30 starts, but earning only six wins due to horrendous run support.  Roy Halladay's injuries starting taking their toll, and in his penultimate season the former ace went 11-8 with a 4.49 ERA in 25 starts.  Jonathan Papelbon joined the club in the offseason and saved 38 games.  Antonio Bastardo and Jeremy Horst were the team's other top relievers.

Key events:  Jim Thome returned to the Phillies in an offseason free agent signing, playing only four games in the field and being used mainly as a pinch-hitter and DH in American League ballparks.  He had his biggest hit of the season on June 23rd when his walk-off home run gave the Phils a 7-6 win over the Rays.  It was his 13th game-winning home run, the most in Major League history.

Thome joined Victorino, Pence and Joe Blanton in getting traded to contenders half-way through the season when the Phillies fell out of contention.  A week before the fire sale, the Phillies and Hamels reached an agreement on a six-year contract extension, which includes a vesting option for the 2019 season.  Howard hit his 300th career home run on September 22nd.

2012 Phillies in 2012 Topps
Who's in:  Phillies players appear on an impressive 17 cards in the first series and another 13 cards in the second series.  Add in the 9 Phillies cards from the update set, and that's a total of 39 cards for a complete Phillies team set.  That's the most since the 41 Phillies cards found within the 2009 offerings.  There's also a short-printed Howard variation card, which is probably the best Phillies card in the entire team set.

I kind of liked these cards when they came out, but I soured on them when it seemed as if every pack I opened had one of these cards in it.  The idea for this subset is unique, but I would have rather it been an insert set instead of taking up valuable room in the base set.
#US91 Jonathan Papelbon, #US206 Cole Hamels, #US295 Carlos Ruiz
Who's out:  As is the norm, the bench and the bullpen could have been shown more love.  Kevin Frandsen, Freddy Galvis and Erik Kratz were on the bench for most of the season, and a case could be made that relievers Chad Qualls and Horst deserved cards.

Phillies on other teams:  Thome has three cards in the first series featuring him with other teams.  He appears on two Active Leaders cards (#91 and #324) with the Indians and a Higlight/Checklist card (#97) with the Twins.  There are also cards of Schierholtz (#63 with the Giants) and Wigginton (#154 with the Rockies) in the first series.  Finally, if you want a 2012 Topps card of Mike Fontenot, who appeared in 47 games for the Phillies, he can be found within the Giants retail team set (#SF7).

What's he doing here:  I don't share the same venom towards Martinez as other Phillies fans, but I do find in a little strange that a utility infielder who struggled to sniff the Mendoza Line received Topps cards two years in a row.  Frandsen, a Phillies Room Favorite, got robbed.
Cards that never were candidates:  Frandsen, Galvis, Kratz, Horst and reliever Raul Valdes over Qualls.

Favorite Phillies card:  I love the short-printed Howard variation card, but since I'm not counting that as part of the regular team set, I'll go with Polanco's card featuring him at the bat rack.  The card definitely makes me think of Tony Taylor's 1970 Topps card. 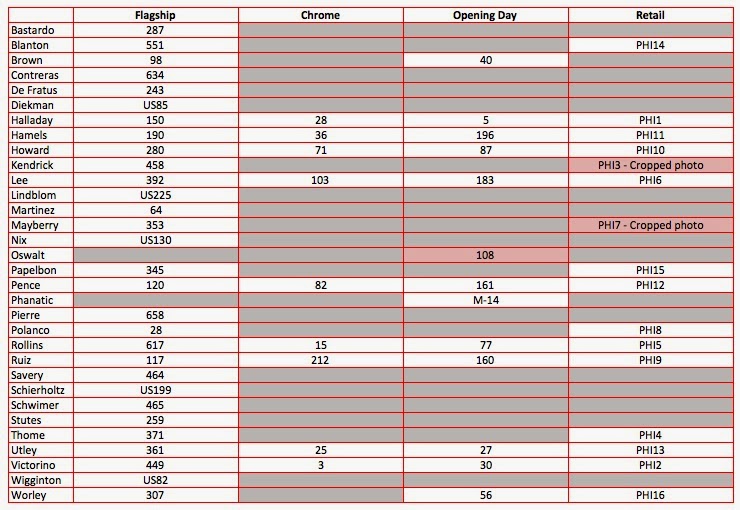 Other Stuff
Variations:  After several years of quirky and interesting variations to be found in the Opening Day, Chrome or retail team sets, there were only two minor variations within the 2012 Topps family of products.  I'm not sure if this is a symptom of the Phillies becoming a mediocre team or if this was widespread for all teams.

In any event, the only variations to be found are the cards of Kendrick and Mayberry within the retail team set which feature the same photos as their flagship cards, but more tightly cropped.  Oswalt, who parted ways with the Phillies in October 2011, has a Phillies card in the Opening Day set.
Memory Lane:  I took a stab at drafting a working checklist for the set back in January 2012.  I'm still waiting to hear from Topps on this.
Posted by Jim at 7:00 AM