I updated this post here in November 2020 and this original post is now outdated.
Number of Cards:  51
Card Size:  3 1/2" x 5 1/4"
Description:  With the exception of the copyright date on the bottom right, these cards are identical in design to the sets issued in 1985 and 1986.  Fronts feature a full color picture and the backs include brief biographical notes on each player.

How Distributed:  All fans attending the April 12, 1987 Phillies game at Veterans Stadium received the 47-card set.  The four blank-backed update cards (I believe) were sold separately at the stadium late in the season.  I have a very vague recollection of purchasing the four-card update set for $1 at a game during the '87 season.

Complete Standard Checklist (47):  The cards are unnumbered, but I've presented them below ordered by uniform number.
Complete Update Checklist (4):

Elia was named manager on June 18th following the firing of Felske.  The others featured in the update set made their Phillies debuts in May or June, as follows:  Ritchie - May 1st, Hughes - May 19th and Calhoun - June 16th.

As originally documented in this 1987 Phillies Missing Links post, this set is the only place to find Phillies baseball cards for Bair, Cowley, Jelks and Legg.  (I have a little more on the other three guys below.)  The First Appearance designation is for players who have never before appeared within a Phillies team issued set.  These players may have already appeared on other Phillies baseball cards.

Managers (2):  Felske, Elia
Coaches (1):  Jim Davenport, Lee Elia, Claude Osteen, Mike Ryan and Del Unser are all featured on a card together.
Phillie Phanatic (1):  I believe the photo used was taken as the Phanatic was atop the Phillies dugout in Clearwater.
Broadcasters (0)
Multi-Player Prospect Cards (2):  Kaye/Loy, Barton/Lundblade
Other Cards (1):  Team card 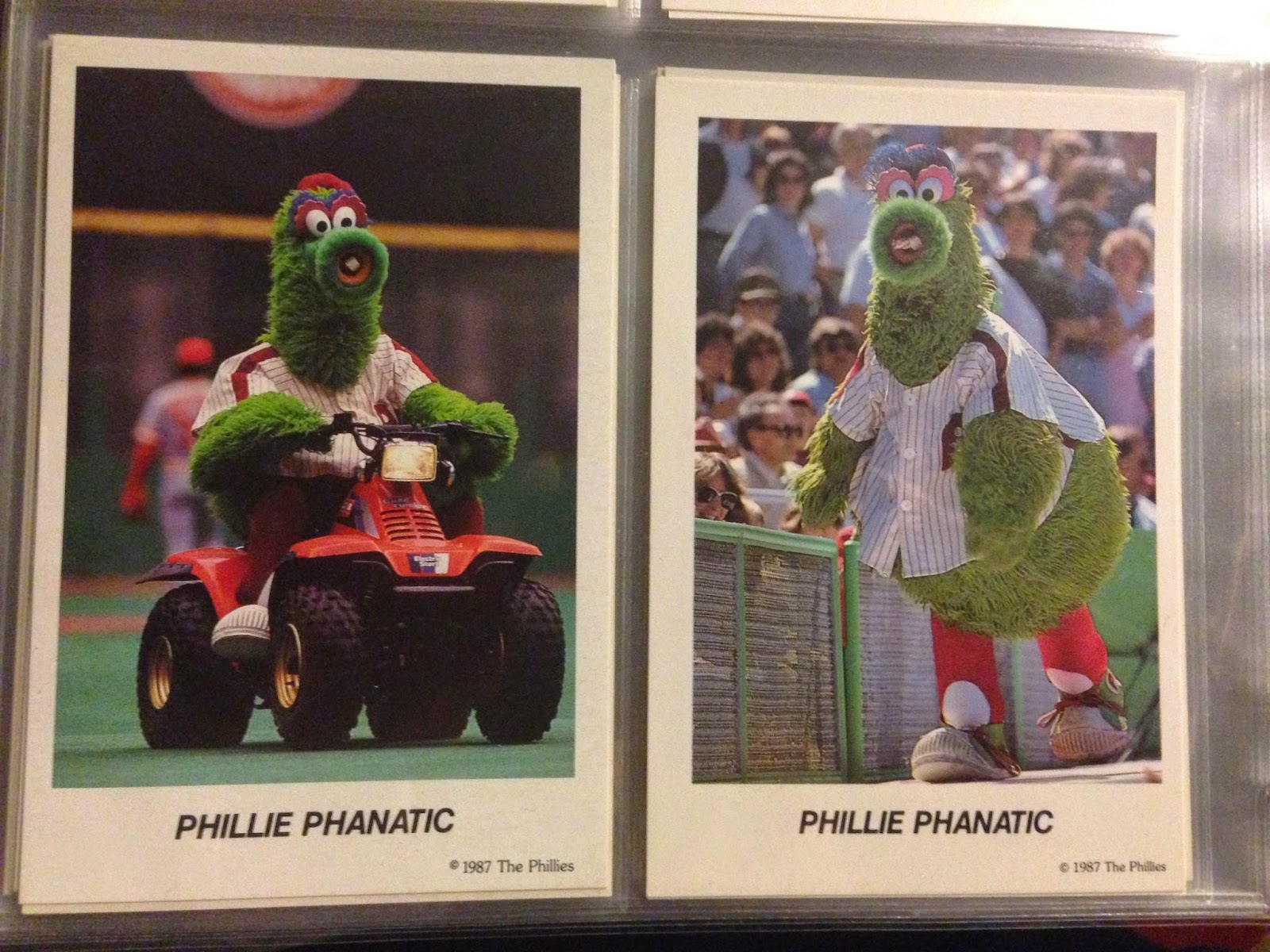 Based on Rick's comment below, it appears as if there's an additional variation of the Phanatic card featuring different writing on the back.

Update (11/15/18) - Fellow collector Bill e-mailed me the photo below of a black and white Don Carman card, bearing a 1987 copyright date.  Bill obtained the card at a baseball card show in Pennsylvania where Carman was an autograph guest. 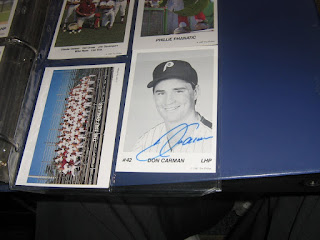 Also See:  One of the more desirable (in my opinion) and difficult to find team issued sets is the 1987 Phillies Great Performers of 1986 set, issued to season ticket holders who renewed their 1987 season tickets early.  14,000 Phillies created an entry for this set as part of his Phillies Database Project.

Trivia:  There are a couple of things with this set that only a few of us would find interesting . . . As far as I can tell, this is the first team-issued set featuring solo cards of players that never actually played for the Phillies.  Cipolloni, Olander, Scanlan and Watts never got the call to the big leagues with the Phils, nor did the four prospects featured on the multi-player cards for that matter.

There are two #39's in the original set - Scanlan and Cowley.  I'm assuming Scanlan started the spring with #39 and Cowley requested the number upon his arrival from the White Sox late in the spring on March 26th.  Cowley had worn #40 with the White Sox, but that number already belonged to Bedrosian.
Resources:  Phillies SGA 1987; Beckett.com; Phillies collector Rick (@rickphils) and Steve F.
Posted by Jim at 7:00 AM

There are 2 additional postcards: Two versions of the Phillie Phanatic. Cards are the same on the front but have different writing on back. Phillies were selling them at the Game Used Kiosk the past two summers--and not cheap.

Thanks Rick. I've updated the post for the Phanatic variations.