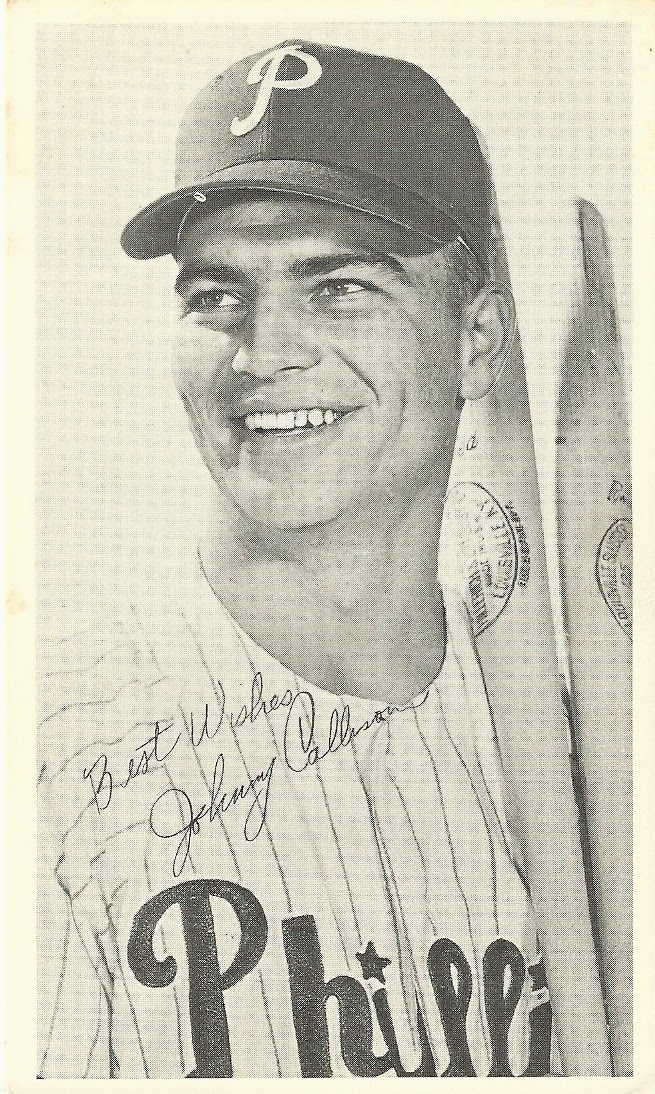 Number of Cards:  78
Card Size: 3 1/4" x 5 1/2"
Description:  These postcards featured black and white portraits of Phillies players (and managers) to have suited up for the team between 1950 and 1969.  Most of the postcards contain black facsimile autographs on the fronts, and the backs are blank.

How Distributed:  The cards were produced throughout the '50s and '60s by the Phillies as needed and as new players joined the club.  There's no way to tell which year any particular card is from, other than each player's card would have been issued during his tenure with the Phillies.  For example, the Johnny Callison card featured above could have been issued at any point, and over several different years, between 1960 and 1969, the years Callison played for the Phillies.

Vintage-wise, Dick Sisler is the earliest ex-Phillie, having left the club following the 1951 season.  Deron Johnson is the latest Phillie on the checklist, having joined the club in 1969.

Complete Standard Checklist:  This list could grow, although I suspect that any new postcard discoveries would have been made by now.  With the advent of the internet age, the mysteries surrounding these types of issuances are slowly dissipating.
One and Done (1):  Going through my collection and double checking the Beckett database, I believe these postcards mark the only Phillies baseball card appearance of Charley Smith (112 games in 1961).
First Appearances (62):  There are 63 known players to have appeared in these postcard sets.  C. Smith and 61 other players who appeared elsewhere on Phillies baseball cards throughout the years.  (The First Appearance designation is for players who have never before appeared within a Phillies team issued set.  These players may have already appeared on other Phillies baseball cards.)

Trivia:  The players with the most games with the Phillies in the 1950s without a team issued postcard are - Eddie Waitkus (559 games), Ted Kazanski (417 games) and Johnny Wyrostek (315 games).  From the 1960s, the top three players by games played but not appearing on a Phillies postcard are - Ruben Amaro (668 games), Pancho Herrera (271 games) and Don Lock (215 games).
Resources:  Fellow Phillies collector Rick (@rickphils) provided the scans below.  The checklists were originally compiled by collector Dan E. and Rick has made notations on the lists throughout the years based on his discoveries of new variations.  Thanks again to Rick for sharing these lists and the scans!  (Click on each to enlarge.)

Impressive list, Jim and Rick. I have a bunch (perhaps a dozen) in my collection and I had no idea when they were issued or what set(s) they were part of.

Jim, when you say "these postcards mark the only Phillies baseball card appearances for Jacke Davis (48 games in 1962)", you mean "Phillies team issue" appearance I take it, since Jacke Davis was in the 1962 Topps set as a Phillie.

Totally missed Davis' 1962 Topps card . . . which I'll chalk up to being disgruntled about the Giants winning Game 1. I'm going to update the post.

And I'd definitely go with Jack-Kay.

UPDATE - I've updated the checklist for an e-mail received from Rick:

There are 2 Larry Jackson team issues---not any Don Cardwell cards.

I just found a postcard (3 1/4" X 5 1/4") that is a more cropped version of this postcard and on the back is a chart printed in red of his years/club and other stats. Wondering about this card. Don't remember how I got it. ha ha