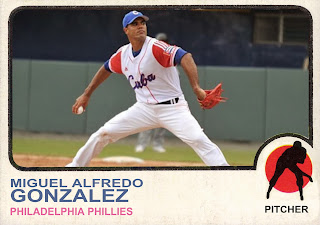 For ten teams, the postseason began last night.  (And it will continue for nine teams.)  For the Phillies, the offseason began when Cesar Hernandez flew out to Braves left fielder Justin Upton to end Game 162 and begin the long countdown to the day when pitchers and catchers report to Clearwater.

This post will serve as a look back at the in-season transactions made by the Phillies.  The only move below with serious ramifications for 2014 is the signing of Cuban defector and right-handed pitcher Miguel Alfredo Gonzalez.  Various reports I've read have him either slated as the team's third starter or as a back-end of the bullpen guy.  Either way, here's hoping the $12 million, three year contact the Phils gave to the pitcher pays off.

Arrived During the Season
Ezequiel Carrera (4/2/13) - Selected off waivers from the Cleveland Indians.
John McDonald (6/27/13) - Traded by the Cleveland Indians for a player to be named later or cash.
Casper Wells (8/13/13) - Selected off waivers from the Chicago White Sox.
Roger Bernadina (8/21/13) - Signed as a free agent formerly with the Washington Nationals.
Miguel Alfredo Gonzalez (8/30/13) - Signed as a free agent.

Memory Lane
2012 In-Season Transactions
Posted by Jim at 7:00 AM