Five years ago this weekend, the Phillies were celebrating their 2008 N.L.D.S. victory over the Milwaukee Brewers.  The Phils handled the Brewers in four games, with Shane Victorino's grand slam off C.C. Sabathia in Game 2 being the image that still comes to my mind when I think back on that awesome series.  The Phillies reached the N.L.C.S. for the first time since 1993 where they dispatched of the Dodgers in five games.

They met up with the Tampa Bay Rays in the World Series and the pure joy I experienced on October 29, 2008, when Brad Lidge struck out Eric Hinske, easily marks the high-water mark in terms of my Philadelphia Phillies fandom.  And five years later I'm still rooting and still hoping to feel that pure joy again.

The Set
Number of cards in the set:  There are 660 cards in the base set, which was once again released in two series.  I'm not counting the super short-printed gimmick cards in my tally, including cards of former New York City mayor Rudy Guiliani celebrating with the Red Sox following their World Series victory and the fictional Japanese player Kazuo Uzuki.  The update series added another 330 base cards and several more gimmick cards.
My very brief thoughts on the set:  With the cool multi-colored circle letters at the tops of each card spelling out team names, I should love this set.  But the much-maligned and blog-documented Topps "logo bump" interfering with the photos is just too annoying for me to overcome.  If you've never noticed this, please check out the Redefine the Design post from Uncle Doc's Card Closet from earlier this year.  The redefined design is much, much better.  And not to pile on, but some of the photo choices used for the Phillies cards are just bizarre.  Rollins is literally just standing around, Utley is too far away and Lidge was the recipient of an awful Photoshop job.
Notable competition:  Upper Deck folded the Fleer brand in 2007, so 2008 saw the release of card sets from just two major manufacturers - Upper Deck and Topps.  In a way, it was good to not have to chase so many different card sets . . . but I still miss Donruss, Fleer, Pacific, etc.

2008 Phillies
Record and finish:  The Phillies finished the season with a 92-70 record, three games ahead of the second place Mets.  They defeated the Brewers in the N.L.D.S., 3 games to 1, and then the Dodgers in the N.L.C.S., 4 games to 1.  It took them five games - with game five being played over three days due to severe weather - to defeat the Rays in the World Series.
Key players:  Ryan Howard had another monster year, hitting .251 with 48 home runs and 146 RBIs.  Not far behind him were Chase Utley (.292, 33, 104) and Pat Burrell (.250, 33, 86).  Jimmy Rollins took a step back after his MVP-season, but he was still a key contributor (.277 and 47 stolen bases) to the offense.  Jayson Werth became an everyday player for the first time in his career and hit .273 with 24 home runs.  The Phils also received solid support off the bench from Geoff Jenkins, Chris Coste and Greg Dobbs, who hit .301 with a league leading 22 pinch hits.  Cole Hamels had an impressive regular season on the mound, going 14-10 with a 3.09 ERA and 196 strikeouts in 227 1/3 innings.  But he truly dazzled during the postseason, going 4-0 in his five starts with a 1.80 ERA.  His efforts won him both the N.L.C.S. and the World Series MVP honors.  Jamie Moyer led the team with 16 wins and Brett Myers returned from the bullpen to win 10 as a starter.  Joe Blanton, acquired in July to bolster the rotation, went 4-0 with a 4.20 ERA in 13 strong starts.  Finally, Lidge enjoyed a career year, converting 41 saves in 41 opportunities in the regular season and another 7 saves in the postseason.
Key events:  I'd call winning the franchise's second World Championship in its then 125-year history pretty key.

Both Helms and Lahey were on the Phillies active roster to start the season.  Helms was designated for assignment following the season opener to make room on the roster for the recently signed reliever, Rudy Seanez.  Lahey was designated for assignment four games into the season when Lidge was activated from the disabled list.  I wrote about both Helms' and Lahey's short time with the 2008 Phillies in this post.
Who's out:  Relievers Ryan Madson (76 games, 3.05 ERA) and Clay Condrey (56 games, 3.26 ERA) were both key components of the Phillies strong bullpen, but both got left out of any Topps sets in 2008.  He wasn't as effective, but Seanez appeared in 42 games for the Phillies and also got shut out.  Matt Stairs was acquired too late in the season to be included within the update set, but his N.L.C.S. Game 4 heroics against the Dodgers will forever endear him to Phillies fans.

Phillies on other teams:  Stairs (#134) appears with the Blue Jays in the base Topps set.  Others receiving cards with their former teams within the base set include Taguchi (#82, Cardinals) and Blanton (#436, Athletics).  Iguchi was let go by the Phillies following the 2007 season, and he appears with the Padres (#UH133) in the update set.  The Phils brought him back for the final month of the season to help provide late-inning defense.  Finally, reliever Scott Eyre has a card within the 55-card Cubs Topps Gift set.
What's he doing here:  Without a doubt, it's got to be Lahey.
Cards that never were candidates:  In order to have Topps cards of everyone on the Phillies 25-man World Series roster, we need cards of the following players - Stairs, Eyre, Condrey, Madson and J.A. Happ.  Happ went 1-0 with a 3.69 ERA during the regular season and pitched three innings of relief against the Dodgers in the N.L.C.S.
Favorite Phillies card:  I'll go with Howard's card.  Just looking at it again for purposes of this post brings back such great memories of the beginning of the team's magical run.  Blanton has a great card too, and the photo actually works well with the logo bump.

Other Stuff
Recycled:  Topps Opening Day was back again this year, and the cards have a garish all-red border.  The release of Topps Chrome saw the use of slightly different photos compared to what was used in the regular base set.  This was a welcome change.  The Topps Phillies retail set contained 14 cards and the cards of Dobbs, Jenkins and Utley featured different or cropped photos when compared to their cards appearing in the base or update sets.
Memory Lane:  To date, the only World Series game we've ever attended was Game 3 of the 2008 World Series.  This was the game delayed over 90 minutes at the outset and started in a steady drizzle.  We braved the elements, cheered for Moyer at the outset and erupted with everyone else when Bruntlett scored the winning run on Chooch's walk-off infield hit.  We didn't mind that we didn't get home until almost 3 in the morning, and our babysitter made out very well that night too. 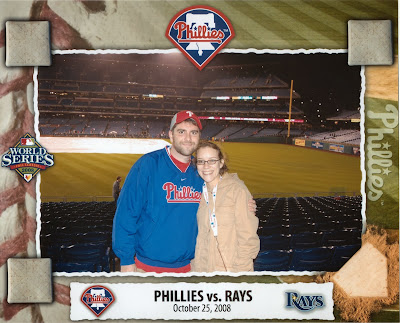 Love this set, I was living in Philly in 2008, and in my first pack of cards I bought was the Howard - It was the 2008 design that turned me onto the hobby again, I just fell in love with the design and it works great with the Phillies but not so much for the Marlins

The 2008 Phillies team set (which I picked up in the weeks following the World Series that season) were the first cards I bought since 1993.

If the Phils hadn't won the WS, I probably wouldn't have gotten back into the hobby.

Boy, that's an empty park, especially for a WS game. Were you guys almost the last two in the stadium that night??? Or was that during the rain delay and they made everyone go under the stands?

I was waiting for the game to start at about 8:30 that night when my wife remembered that Target had a fire pit on sale that we wanted and the sale ended that night. I remember rushing to a Target about 10 miles away while listening to the pregame show/rain delay banter. I picked it up just before the store closed and heard the start of the game on the way home. Six days later, on Halloween, we had a fire in the pit while hosting trick-or-treaters, and I remember later that night calling in to both WIP and 97.5 The Fan to talk about the parade and ceremony at CBP while tending a fire.

Strange memory I have of that game!

We were actually two of the first people in the ballpark, and we were lucky enough to have seats underneath an overhang. At the time the picture was taken, everyone was crammed into the concourses waiting for the weather to pass.

That's a great memory you have of the game!

Here's a funny follow-up: I was so psyched about it all (beer may have played a role in this part of it as well as we had my neighbor hanging out after the trick-or-treaters left and we had had a few...) that I decided I was going to leave a message for the team. I called 215-463-5000, and I got to an option where I could get to the Phillies phone directory. I spelled out the name "Montgomery" and actually reached Dave's VM, so I left him a congratulatory message (mentioning I was a season ticketholder). Then for some reason I decided to leave a similar message for Scott Palmer, the team's PR director. Well, the next day Scott called me back to thank me for the message--needless to say that was a surprise! I've liked him ever since then.