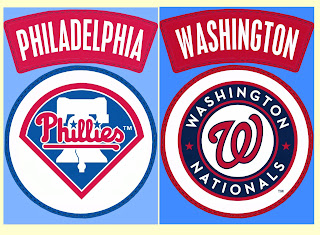 At the Ballpark:  There are all kinds of themes and group ticket offerings for this weekend series, but there are no giveaways as far as I can tell.  Various offerings going on include - Beltway Burger Pack, Miller Lite Party Night, Pups in the Park #4 and Kids Run the Bases.

Wins:  Cliff Lee - 13
ERA:  Cliff Lee - 2.97
Strikeouts:  Cliff Lee - 187
Saves:  Jonathan Papelbon - 26
1973 Topps Flashback:  At last we come to Billy Wilson.  Wilson's card is the last remaining Phillies base card from the 1973 Topps set yet to be featured in one of these flashback segments.  He receives the placement here for the Nationals series, solely because I had no other place to put him.

Wilson shared his 1967 Topps rookie card with Grant Jackson and then appeared on solo Topps cards with the Phillies from 1970 until 1973.  Prior to pitcher Roy Oswalt's one inning in left field in the 16-inning game back on August 24, 2010, Wilson was the last Phillies pitcher to play a different position when he played an inning at third base on August 6, 1971.
Posted by Jim at 6:05 PM

Email ThisBlogThis!Share to TwitterShare to FacebookShare to Pinterest
Labels: 1973, 2013 Season, Wilson B.

Nice view of the original orange and yellow seats at the Vet on Wilson's card!