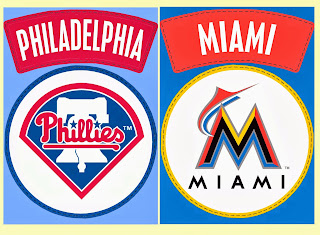 At the Ballpark:  The Marlins have some promotional ticket packages available for this series, but no giveaways are scheduled.  It's probably for the best, as there will likely be a ton of empty seats for these weekday games.

1973 Topps Flashback:  The Standard Catalog describes the 1973 Topps Team Checklists set as "relatively scarce" and "somewhat mysterious," which is probably why I didn't know the set existed until a few years ago.  Not to be confused with the red-bordered 1974 Topps Team Checklists set, this set is believed to have been included with the high-numbered series of 1973 Topps cards, and it might have also been made available as a mail-away offer.

The card backs feature an alphabetical team checklist of all base cards appearing for each given team within the 1973 Topps set.  Interestingly enough, it also features any Rookie Stars cards featuring Phillies players, but it does not checklist the team card (#536).  I also found it interesting that the front of the card contains the facsimile autograph for "Robert" Boone, even though Boone didn't receive his own card in the set.

As it stands right now, the 2013 Chachi set will have 73 cards, with team leaders and a checklist card wrapping up the set.
Posted by Jim at 6:10 PM