What It Means:  I was at this game, and I wondered if it would be the last time I'd see starting pitcher Cole Hamels pitch to Ruiz.

What Went Right:  Hamels was brilliant in his seven innings of work, allowing just a run on two hits while striking out eight.  69 of Hamels' 87 pitches were strikes.  The offense was quiet through the first seven innings, but then came alive with two outs in the eighth.

Recent call-up Cesar Hernandez walked and then was doubled home by Rollins.  After Chase Utley was intentionally walked, Ruiz singled home Rollins to give the Phillies a 3-2 lead.  Jonathan Papelbon walked a tight-rope in the ninth before finally recording the third out and earning his 24th save.

Featured Card:  When looking for a card for this post, I was surprised to see that Rollins only has base cards in the Topps flagship, Opening Day and Heritage sets this year.  He doesn't have a base card in the Gypsy Queen release, but he does have a mini relic card, featured here. 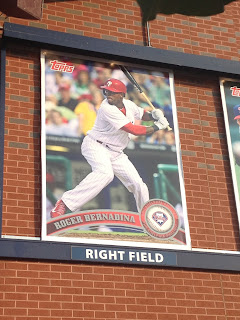 Field Report:  My son Doug and I attended this game together, and it was Doug's last Phillies game of
the season.  (I'm heading to one more game later this month with my wife.)  We've developed a little routine during the season and it's likely to carry over to 2014.

We arrive early, walk around and check out the Majestic Clubhouse store, get a box of popcorn for Doug, Doug devours popcorn during the first few innings, we wait until the fifth or sixth inning and get water ice and then we walk around the ballpark shortly after the seventh inning stretch.  We left in the top of the eighth in this game, so we missed the late comeback, but it was still a fun night.

Here are a few interesting things to pass along to fellow Phillies fans/collectors:

- Roger Bernadina had a giant 2011 Topps style card in the Ashburn Alley starting line-up, but Hernandez did not.
- All Michael Young t-shirts and jersey are 75% off.
- The team issued postcard sets are now just $3 and two different vendors told me there wouldn't be another set this year.  "This is it," one of the vendors told me.  "They're not adding any more cards this year."
- I picked up a John Kruk "action figurine" that was free with the purchase of a $10 Phillies Yearbook.
Posted by Jim at 7:00 AM

You've become a news site, at least to me. I read this and thought, why are Michael Young jerseys so cheap? Then I Googled his name and there it was. I had no idea. That's less a function of me having an awesome Labor Day weekend than of my total lack of interest in this team. Although I admit that Sandberg has at least stopped the bleeding, or at least the team has decided that they don't have to lose every game like they seemed to think for the final month under Charlie.

Also, thanks for the heads-up on the Kruk figurine. I don;t know whether I'll get back there again this season, but I have a friend there tonight and I've asked him to pick two up for me (one is for my son) if they.

Good luck with the Kruk figurine. The last few games we attended the deal was a free Chooch bobble head with the purchase of a $10 yearbook.

Thanks. He ended up empty for me because his son was being difficult and he couldn't deal with both issues....

When I went to a Sunday game in August, that was the deal too (the Chooch bobble). I was at the game and so I was hoping they had moved on to Cole, but the Kruk figurine works for me too. I may have to try to get there again, but maybe I will call first. I know the newsstands and program vendors typically sell them. There's a guy selling programs outside the gates, isn't there? Or is he just inside the gates? I can't remember now.

There's a guy selling outside the gates.

Send me an e-mail if you haven't picked up a Kruk figuirine by the Mets series, and I'd be happy to get one for you.

Thanks, Jim. I will do that.