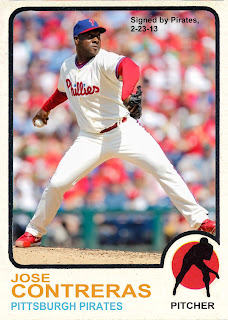 Similar to a post I ran this time last year, I wanted to record for posterity's sake the 2012-2013 offseason transactions made by the Phillies.  I last updated this list on February 4th and I starred the players below who weren't featured on that list almost eight months ago.

Jose Contreras ended up appearing in seven games with the Pirates in May, but he was released following seven appearances in which he allowed five runs in five innings.  The Red Sox organization picked him up on July 19th, but he was released a month later without ever having appeared with the big club.

And wouldn't it have been nice to have Nate Schierholtz around this year?  Acquired last summer in the Hunter Pence deal, Schierholtz was essentially released by the Phillies in November in order to preserve a roster spot for Laynce Nix.  Nix was released by the Phils in mid-August after posting a .180 average in 81 games.  Schierholtz signed with the Cubs and has had a career year.