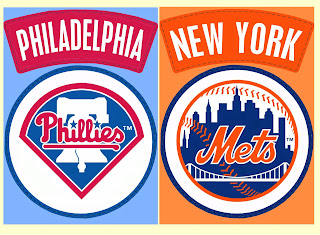 At the Ballpark:  Kudos to the Mets for actually having decent giveaways.  But . . . why limit to the giveaways to the first 1,000 or 10,000 fans?  The Phillies have never limited who gets their giveaways, and I sincerely hope they stay away from this practice.

On Tuesday night, the first 1,000 fans will receive a triple bobble head of Mets announcers Keith Hernandez, Ron Darling and Gary Cohen.  Wednesday night is Mets bowtie night and Thursday afternoon is Mets sunglasses day - both to the first 10,000 fans.

1973 Topps Flashback:  Throughout the season, my favorite flashbacks have featured cards of players whose careers intersect nicely to give the connection made in these little write-ups some meaning.  Such is the case with the two cards featured here.

Jim Fregosi was recently in town to celebrate the 20th anniversary of the wonderful 1993 Phillies team that won the N.L. pennant.  Fregosi managed that club, and it was his only winning season in his parts of six seasons with the Phils.  During his playing career, way back in December 1971, Fregosi was on the wrong end of what turned out to be an extremely lop-sided trade.

The Angels traded the six-time All-Star to the Mets for four players, including future Hall of Famer Nolan Ryan.  Fregosi put up horrible numbers in his two years with the Mets before he was unceremoniously sold to the Texas Rangers.  Ryan blossomed into a dominant starting pitcher and the eventual all-time strikeout leader.  On the card featured here, celebrating 1972's strikeout leaders, he's sharing space with fellow future Hall of Famer Steve Carlton.
Posted by Jim at 6:10 PM