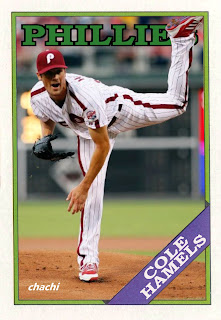 One Sentence Summary:  The Phillies walked off for the third night in a row, this time on a bases loaded walk to Chase Utley to give them the 4-3 win.

What It Means:  Everything is clicking for the Phillies . . . just a few months too late.  The Phils have now won three in a row, and five of their last six games.  There's been clutch hitting, good defense, solid starting pitching and reliable relief work.  Makes me anxious for the 2014 season!

What Went Right:  Pinch-hitter Cody Asche and Jimmy Rollins led off the ninth with back-to-back singles.  After Michael Young walked, Utley came to the plate and drew a six-pitch walk to force in the winning run.  Carlos Ruiz had a huge two-run double in the sixth to tie up the score at three a piece.  Darin Ruf started the scoring with his 10th home run in the second inning.

Cole Hamels pitched well again, and once again came away with a no-decision.  He has reclaimed the staff ace mantle, as he has a 2.74 ERA in his last 15 starts, but just four wins to show for his efforts.  This is the second 2014 Chachi Preview card to see the light of day, and I thought the 1988 Topps design looked particularly good with the old maroon uniforms.
Posted by Jim at 5:00 PM