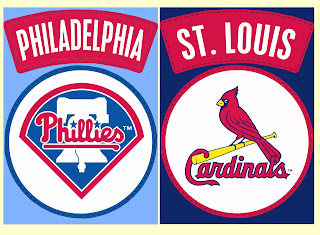 At the Ballpark:  Before Thursday night's game, the Cardinals will give out 150 tickets (each) to get an autograph from either Allen Craig or Matt Carpenter.

1973 Topps Flashback:  Today's flashback features two players who were teammates with the Cardinals in the mid-'70s and again with the Phillies in the late-'70s.

Ted Sizemore came to the Cardinals in October 1970 in the trade that sent Dick Allen to the Dodgers.  He was the Cards' regular second baseman for five seasons with his best year coming in 1973 when he hit .282.  He returned to the Dodgers for a season in 1976 before beginning his two-year stint with the Phils.  I wrote about Sizemore during a 1979 Topps Flashback last season.

Ah yes, Tim McCarver.  The long-time player and announcer is retiring at the end of this season, and I lasted through six innings of his broadcast with Joe Buck during this year's All-Star Game before muting my television.  McCarver spent parts of his first ten seasons with the Cardinals before joining the Phillies in 1970 and 1971.  He played for the Expos in 1972 before returning to St. Louis prior to the 1973 season.  As the "STL" logo on McCarver's hat isn't airbrushed on his 1973 Topps card, that would mean Topps dug into its archives and used a four year old picture for this card.  McCarver came back to the Phillies in 1975, joining Sizemore as members of the 1977 and 1978 N.L. Champs.
Posted by Jim at 7:15 PM

If you only lasted 6 innings with Timmy, then you missed this: