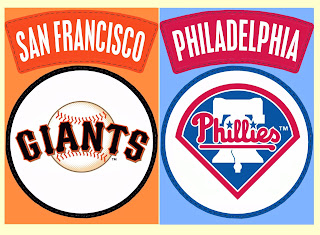 At the Ballpark:  Tonight is Italian Heritage Night, with special Italian celebrations happening throughout the ballpark.  (I'm not sure what that actually entails.)  On Thursday night, former closer and 2008 hero Brad Lidge will officially retire from baseball as a member of the Phillies.  There will be a pre-game ceremony and all fans will receive a Brad Lidge print.  I'm sure it will be a classy ceremony for a classy guy.

1973 Topps Flashback:  We're digging into the depths of past obscure Phillies players with tonight's flashback, both of whom have connections to Bob Boone.  Dave Rader came up with the Giants in 1971 and was their primary starting catcher between 1972 and 1976.  He bounced from the Cardinals to the Cubs before arriving in Philadelphia as part of the massive eight-player Greg Gross/Manny Trillo deal with Chicago.  In 1979, he appeared in 31 games with the Phils, backing up Boone and hitting just .204.  He played in 50 games for the 1980 Red Sox before calling it a career.

Tom Haller's Phillies career was even shorter than Rader's, as he never even suited up with the team.  Haller played with the Giants from 1961 to 1967, where he was a member of two All-Star teams.  He was an All-Star again with the Dodgers in 1968.  After four successful seasons in L.A., Haller was traded to Detroit for the 1972 season.  In October 1972, the Phillies purchased him from the Tigers to mentor a young Boone, but he opted not to report to the team.  (Hat tip to Jim from Downingtown and his comments on this post.)

No pitching probables or Phillies team leaders in this game summary post, as I'm currently away from The Phillies Room HQ (again) and the blog is on auto-pilot.
Posted by Jim at 6:05 PM

That's interesting about Haller. I never realized he never appeared in a Phillies uniform except in the eyes of a Topps airbrush artist. An autographed copy of that card is in my 1973 binder sheet, but I will have to move it to the Did Not Play sheets with such notables as Bud Smith, Con Dempsey, Ken Sanders and Aaron Myette.

Some other Phillies' cards for the DNP pile: 1970 Curt Flood.

Not looking forward to these game summary posts upon my return . . .