One Sentence Summary:  The Braves absolutely demolished Kyle Kendrick and the Phillies, 13-4.

What It Means:  After a nice solid win on Friday night, the Phillies showed they still remember how to lose horribly.  They'll go for the crucial series split this afternoon.

What Went Wrong:  Nothing really went right.  From the start of the ballgame, Kendrick was off and he was in trouble in each of his five innings.  He exited the game having allowed six runs on 12 hits.  Reliever Joe Savery didn't fare much better, but at least his four runs allowed were all unearned thanks to a costly Michael Young error.

Other than a home run from Young in the ninth, eight of the team's nine hits were singles.

Featured Card:  We've already reached that point in the year when the Phillies swap out their first team issued set, featuring players in Spring Training action, for their second team issued set, featuring game action from the first few months of the season.  The Phils are early this year with a second release, as last year's release didn't come out until the end of July.  I'd recommend picking up a set before the trade deadline, as my guess is that at least a few players will have their cards pulled over the coming months.  Hopefully Chase Utley continues to be in the set through September.  Here's a run-down of who's in and who's out in Phillies Team Issue 2 - 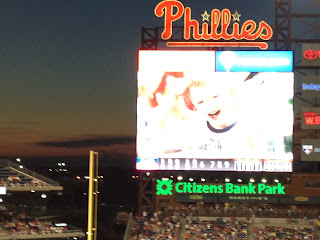 The first set contained 41 cards, while the second series drops to just 40 cards.  Please leave a comment or e-mail me if you'd like for me to pick you up a set.

Field Report:  It was a hot one, but Doug and I toughed it out and lasted into the seventh inning.  We each had two water ices throughout the course of the miserable game to try to cool us down.  Despite the awful performance on the field, there was one highlight from the night that we won't soon forget.  Not five minutes after Doug told me he wanted to one day appear up on the big score board, a camera man appeared at the edge of our row and I was quick enough to snap a blurry photo to capture Doug's starring moment.

Email ThisBlogThis!Share to TwitterShare to FacebookShare to Pinterest
Labels: 2013, Utley

Great timing and even better to get your camera out in time!