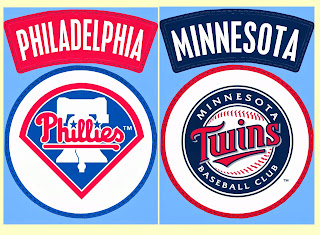 At the Ballpark:  The Twins are in the midst of their third annual Hope Week, in which members of the organization will participate in various charitable endeavors throughout the entire week.  This is a fantastic concept, and it would be great if more teams participated in this sort of initiative.  Tomorrow night is the Twins equivalent of a Dollar Dog night, but they're only giving out 20,000 hot dogs at the game.  Seems reasonable.

1973 Topps Flashback:  It's a trio of former Phillies and Twins for today's flashback.  Of the three, utility player Cesar Tovar spent the least amount of time with the Phillies.  Tovar began his career with eight respectable years with the Twins, finishing in the top 25 of the A.L. MVP voting in five consecutive seasons.  He was the A.L. leader in doubles (36) and triples (13) in 1970, and he led the league in hits (204) in 1971.  The Phils acquired him prior to the 1973 season for Joe Lis, Ken Reynolds and Ken Sanders.

Tovar had an unforgettable single season in the N.L. with the Phils, hitting .268 in 97 games while seeing time at third base, second base and all three outfield positions.  He had just two mainstream cards while with the Phils - this 1973 Topps card and a 1974 Topps card that was issued after he had already been sold to the Rangers.

I wrote about Jim Kaat and Larry Hisle and their time with the Cardinals and Brewers, respectively, during last year's 1979 Topps Flashbacks.  Kaat was an original member of the first Minnesota Twins team in 1961, after the franchise relocated from Washington.  The bulk of his 25 year career was spent in Minnesota, and he's second on the franchise's all-time wins list (190) behind Walter Johnson's 417.  Kaat played until 1983, earning the distinction of being the last active former member of the Washington Senators.

Kaat and Hisle were teammates on the Twins for only part of the 1973 season, as Kaat was waived and picked up by the White Sox in August.
Posted by Jim at 7:10 PM