It's difficult to estimate the number of Phillies games I've attended over the years, but I'll try for purposes of this post.  Between 1979 and 1991, I probably attended one to three games a year.  For Christmas in 1991, my parents surprised me with a Sunday season ticket plan, which I held with my Dad from 1992 through (I think) 2005.  If I recall correctly, there are fourteen to fifteen home Sunday games a season.

My wife and I switched over to a 17-game partial season ticket plan in 2006 when my Dad decided he had more fun watching the games from home.  We average a dozen or so games a year, selling tickets we can't use due to work conflicts, t-ball conflicts or my desire to steer clear of any Mets games.  Adding up these loose figures means that I've probably attended between 250 and 400 Phillies games in my 40 summers.

I don't remember all of these games, of course.  But I definitely remember some of the more memorable games I've attended.  I remember watching Mike Schmidt, Steve Carlton and Pete Rose play.  I remember the excitement of Opening Day 1992 when the Phillies debuted their new uniforms, and I received in-school suspension for skipping school along with several of my good friends.  I remember the last games at The Vet and the first games at Citizens Bank Park.  I remember Kevin Millwood's no-hitter, postseason games between 2007 and 2011, and both of my son's first games.

I do not remember my first game, but I can view a picture of myself at my first game within the Phillies' 1980 Yearbook.  And I have my Dad to thank for that.


I was five going on six in the summer of 1979 when my Dad took me to my first Phillies game.  We went with my friend Rusty and his Dad, referred to as Little Rusty and Big Rusty in my household, similar to how my Dad and I were known at the time as Big Jim and Little Jimmy.  (It's been a very long time since anyone has referred to me as Little Jimmy.)

My guess is that we rode in Big Rusty's van, with Dire Straits or the Beatles playing on his eight-track player.  The pictures we have of that day tell me that upon arriving at The Vet, my Dad made sure I was properly attired.  I already had a Phillies hat, but he bought me a Phillie Phanatic t-shirt and a button, and a 1979 Phillies Yearbook.  Luckily enough, the give-away that day was a Dick Perez produced poster of the entire 1979 Phillies team.

As we were making our way to our seats, a roaming photographer must have spotted Little Rusty and me in our Phillies gear and he asked us to pose for a few pictures.  We obliged of course, thinking we were minor celebrities, and this type of thing was typical at a Phillies game.  The photographer wanted us to open up our new posters and look at them, smiling.  I'm guessing Rusty and I thought that was a pretty corny thing to do, but we smiled and posed and then probably started bugging our fathers for food.

I don't remember the game at all.  Thanks to information available over at Phillies SGA, I've determined the game was against the Dodgers on Sunday, July 15, 1979, as that was when the poster was given away.  The Phils won that day by a score of 10-3, behind Bob Boone's four-hit day and Del Unser's three RBIs. 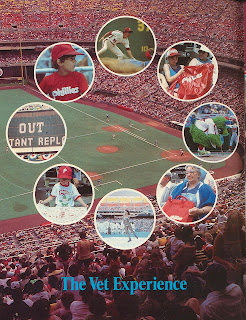 Months passed, my interest in the Phillies waned over the winter months and my attention most likely drifted back to Star Wars.  At the beginning of the 1980 season, Big Rusty purchased a 1980 Phillies Yearbook and he was stunned to see my picture on page six among a collage of fans enjoying the good times to be had at Veterans Stadium.  I'm in the circle on the bottom left, between the picture of the ice skater (?) and the score board.  Unfortunately, Little Rusty had been cropped from the shot.

The yearbook was shared with my Dad and he too couldn't believe there was a picture of me, at my first ever Phillies game, within its pages.  He brought the yearbook home to share it with me, and I remember my first thought was, "How did my Dad pull that off?" 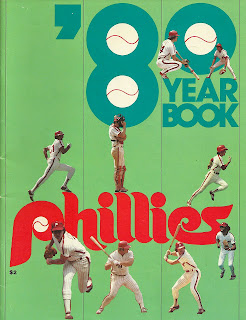 I always smile whenever I see a 1980 Phillies Yearbook.  I was at a Phillies game recently with my six-year-old son, Doug, and we came across a kiosk at Citizens Bank Park that sells old Phillies publications and baseball cards.  I pointed to the familiar mint green cover of the 1980 Phillies Yearbook for sale at the kiosk and mentioned to Doug, "See that Yearbook?  There's a picture of me in there."  He thought that was pretty cool.  And then he asked when were we getting nachos. 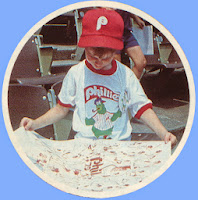 When I started this blog over four years ago, I chose the picture of me at my first Phillies game as my profile picture.  It seemed a fitting choice, as that was when and where my love of baseball and the Phillies truly began.

Once I grew older and (slightly) wiser, I realized it was more luck than anything that landed me in that yearbook.  My Dad had nothing to do with the photographer's choice to take our picture, and he had nothing to do with the yearbook editor's choice to include me in the collage on page six.  But my Dad got me to the game, he bought me the Phillies gear, and he made it all possible.

And I can repeat that last sentence for just about everything I've accomplished to this point in my life when it comes to my Dad, and my Mom for that matter.

Happy Father's Day, Dad.  And thanks for getting me to the game, buying me the gear and making it all possible.  I miss you every day.
Posted by Jim at 7:00 AM

Email ThisBlogThis!Share to TwitterShare to FacebookShare to Pinterest
Labels: 1979, 1980, Boone

I was also at that game with my Dad and my cousin. We had season tickets on the 3rd base line right next to Michael Jack.

Take care and have a great one!
Rick

Happy Father's Day... I know it must be rough this time around.

Go do something fun with your kids. Your father would've wanted it that way. :-)

Happy Father's Day Little Jim. And yes, I still call you that! It's all good!

MM - That's fantastic that you were there too!

Great story of your first game, and your Phillies game count estimate too. My first game was May 15, 1977, a Phillies 5-2 win when I was 8. We had gotten comp tickets from Ron Reed, whom my uncle served in the National Guard with. It was "Red Bat Day." Unfortunately for me, back then, the Phillies didn't give the gift to people whose tickets were free, so I remember specifically not having a red bat when Dan Baker announced, "Kids, hold up your red bats for the cameras!" My dad did buy me a helmet, and my uncle bought my cousin a cap. I remember standing outside the stadium so my cousin could thank Reed for the tickets, but we must have been standing at the wrong exit because he never showed up.

I went to a Sunday Steve Carlton-Phil Niekro matchup in 1978 (4-0 Braves; we sat in the 600 level), and then I attended my third Phillies game in 1979 and got a roll-up cap (June 17 versus the Reds), so I missed you by 4 weeks. I have pictures and my ticket stubs from the 2nd and 3rd game, but none of either from the first--just memories.

In 1994 during the baseball strike, I embarked on a project to try to figure out every game I had attended by looking at my saved ticket stubs, programs where I had scored the game, or giveaway items I remembered getting (which I cross-checked against pocket schedules). I had been to about 150 games by that point. Unfortunately I lost track of the count since then, and while I do still save my ticket stubs, since the advent of StubHub I also still have the ticket stubs of games I sold, so it's going to take some real effort to try to update that list. But I'm probably up to around 300 in Philly, plus another 50-75 or so games in other stadiums (mostly not against the Phillies).

Best wishes from one incurable Phillies baseball card collector to another. -DKO-.