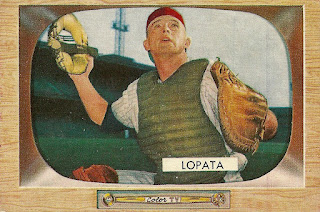 I was sad to learn of the recent passing of former Phillies catcher Stan Lopata, who was a member of the beloved Whiz Kids.  Lopata played 13 seasons in the Majors from 1948 to 1960, with all but his last two seasons spent with the Phillies.  At the start of his career, Lopata served as the primary back-up for Andy Seminick and later Smoky Burgess.  Once he became the team's primary catcher in 1955, Lopata made two All-Star teams.

Lopata waited until 1956 to sign a contract with Topps, so he didn't appear on a Topps card until that season, despite being a veteran of eight years.  Phungo and The Phillies Collector posted nice tributes to Lopata, featuring some of his Topps cards.  But the card featured here, from the awesome 1955 Bowman set, is my favorite Lopata card.

I also wanted to feature the below excerpt from the 1953 Phillies Yearbook, which featured a nice little write-up on the "massive" gentleman they once called "Big Stash".

Email ThisBlogThis!Share to TwitterShare to FacebookShare to Pinterest
Labels: 1953, 1955, Lopata