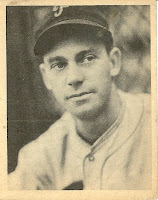 One Sentence Summary:  An anemic offense and another so-so outing from Cole Hamels contributed to the 4-3 Mets win.

What It Means:  Yesterday was the first day of what could be a very long summer for the Phillies.  As Larry Andersen put it towards the end of the game's radio broadcast, the 2013 Phillies just aren't a very good offensive team.  Defensive lapses by Michael Young at third and Delmon Young in right also contributed to the loss.  I've started drafting in a my head a future post to serve as a fan's "2013 Phillies Survival Guide."

What Went Wrong:  Hamels' record dropped to 2-11 for the season.  He allowed four runs on seven hits in his six innings of work.  He allowed a lead-off walk to Lucas Duda to start the sixth, and Duda would eventually come around to score the go-ahead run.

Featured Card:  Hamels became the first Phillies pitcher with 11 losses before June 30th since 1937.  That is absolutely stunning.  In June 1937, both Claude Passeau and Wayne LaMaster had 11 losses by June 30th for a team that would eventually finish with a 61-92-2 record.  Hopefully the 2013 Phillies don't come near the futility displayed by the '37 club.

I don't have any Passeau or LaMaster cards in my collection, so the best I could do was feature another member of the 1937 Phillies team.  I thought it would be fitting to feature the original "Del" Young, given how awful Delmon Young has been to this point in the season.  Del Young was the starting second baseman for the 1937 Phillies.  In 109 games, Young hit .194 and committed 28 errors.

I noticed that the 1937 team had a couple of ties. I'd take a few ties this year. Maybe Hamels can finish something like 7-19-2 to avoid 20 losses.

May I suggest a Hugh "Losing Pitcher" Mulcahy card for a future post on Hamels.

Even though he really isn't pitching that terribly.

I think I actually have a few Mulcahy cards I could dig up if needed . . .