Phillies at Nationals: May 24th to May 26th 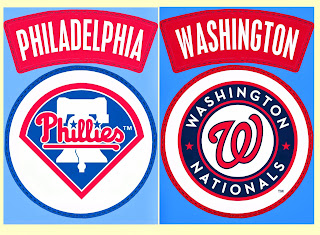 At the Ballpark:  On Saturday, the first 15,000 fans will receive a Nationals Lunch Tote.  It's the perfect way to carry your lunch into work with a intense amount of Natitude.

1973 Topps Flashback:  Today's flashback features two of the three men to have managed at least 1,000 Phillies games - the other of course being the current Phillies manager,  Charlie Manuel.

1973 was Danny Ozark's first season at the helm, and my guess is that there's a Dodgers hat somewhere underneath the airbrushed Phillies logo appearing on this card.  Prior to being hired by the Phillies, Ozark spent eight seasons as a coach for the Dodgers on Walter Alston's staff.  Ozark led the Phils to three division titles in 1976, 1977 and 1978, but his teams never advanced to the World Series. He was fired in August 1979 after 1,105 games with the Phillies and a career win-loss record of 594-510-1.

Three of his four coaches - third base coach Billy DeMars, pitching coach Ray Rippelmeyer and first base coach Bobby Wine - were hold-overs from the previous Frank Lucchesi/Paul Owens administrations.  Only bullpen coach Carroll Beringer was added to the staff  when Ozark joined the team, assuming the same coaching position he had previously held with the Dodgers.  Beringer and Rippelmeyer made it through the 1978 season, while DeMars and Wine would go on to win World Series rings in 1980 under Ozark's successor, Dallas Green.

Gene Mauch began his managerial career with nine tumultuous season with the Phillies between 1960 and 1968.  He joined the expansion Montreal Expos for their first season in 1969 and managed the club through 1975.  In his 1,127 games with the Expos, Mauch compiled a record of 499-627, never finishing better than fourth place in the N.L. East.

There are two other Phillies connections on Mauch's manager card.  Dave Bristol served as the team's hitting coach from 1982 until 1985 and again in 1988, and Cal McLish served under Mauch as a coach during the 1965 and 1966 seasons, following three seasons pitching with the Phillies from 1962 to 1964.
Posted by Jim at 6:05 PM