Brewers at Phillies: May 31st to June 2nd 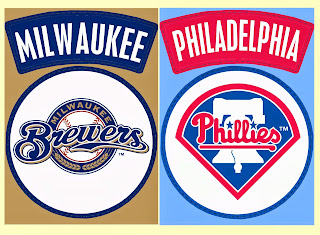 At the Ballpark:  Tonight all kids will receive the Phanatic's latest children's book - Phillie Phanatic's Hall of Fame Journey.  Tomorrow afternoon is the annual Phillies Photo Day, and fans will be allowed down on to the field before the game to take pictures of the Phillies players, coaches and announcers.  All fans will also receive a special Phillies print.  Finally, Sunday afternoon is Father's Appreciation Day with all men 15 and older receiving a special t-shirt.

1973 Topps Flashback:  On October 31, 1972, the Phillies and Brewers pulled off a blockbuster, seven-player trade.  The Brewers received third baseman Don Money, righty reliever Billy Champion and infielder John Vukovich, while starting pitchers Ken Brett and Jim Lonborg, along with relievers Ken Sanders and Earl Stephenson came to the Phillies.  Today's flashback features three cards with poorly airbrushed logos and a card with a skyward looking Vukovich wearing a uniform that used to have red stripes.  The familiar multi-colored seats of Veterans Stadium are clearly visible behind Money.

Sanders received a card in the 1973 Topps set with the Phillies, but the team kept him only a month before flipping him to the Twins in the Cesar Tovar deal.  Stephenson never played for the Phils either.
Posted by Jim at 6:05 PM