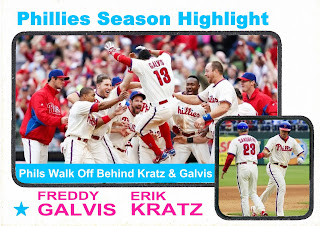 One Sentence Summary:  Erik Kratz and Freddy Galvis keyed an improbable walk-off win with back-to-back home runs in the ninth, as the Phillies won, 3-2.

What It Means:  A walk-off win for the Phils!  They took the series and now head to Miami to try to (finally) get back to .500.

What Went Right:  Nothing went right for the offense for most of the day.  They managed to score their first run in the eighth when Chase Utley singled home Ben Revere.

It was looking pretty grim in the ninth when the Reds brought in their closer Aroldis Chapman.  Chapman walked Delmon Young to start the inning, but then pinch-runner Cliff Lee was caught wandering too far off first and got picked off.

With an out and nobody on, Kratz blasted a solo home run to left to tie the ballgame.  Lee could be seen fuming in the dugout, as the game would have ended then and there had he not been picked off.  On the third pitch Galvis saw, a 95-miles per hour fastball, he lined a home run to left just over the fence and just inside the foul pole.  A home plate celebration ensued and for the rest of the day at least, all was right with the Phillies.

Featured Card:  I'm an optimist, but I don't know how many more highlights these 2013 Phillies have in them.  For that reason, and because this game had me more excited about the team than I had been all year, I felt a highlight card was merited.  I used this design to celebrate Roy Halladay's 200th career win, and it's based off the Boyhood Photos subset from the 1973 Topps release.
Posted by Jim at 7:00 AM

Individual cards for the coaches? Previously-non-existent highlights cards? You are a WILD MAN!!!

Seriously, though... these highlight cards do work well, and it's not like you were going to do anything with the actual "Boyhood Photos" design.