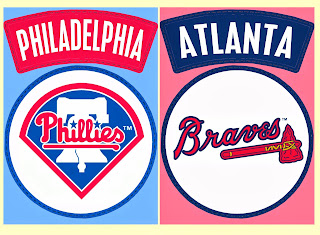 1973 Topps Flashback:  Similar to what I did last year with the 1979 Topps set, I'll try to feature a few Phillies-related cards from the 1973 Topps set in each series preview post that have something to do with the series opponents.

Mike Anderson has no connection with the Braves, but the Phillies traded him to the Cardinals in December 1975 for Ron Reed.  Anderson played in 87 games for the 1973 Phillies, hitting .254 with 9 home runs.  That is one mis-cut card of Anderson's that I have in my collection.  I should probably do something about that.

Reed spent the first 10 years of his career with the Braves (1966-1975) before he was shipped to the Cardinals early in the 1975 season.  Used as a starting pitcher for the Braves and Cardinals, the Phillies converted Reed to a reliever and he enjoyed a successful eight year run (1976-1983) with the club.  His 90 saves with the Phillies place him sixth on the team's all-time saves list.
Posted by Jim at 6:10 PM

Thanks! The Sox "sticker" turned out particularly well.