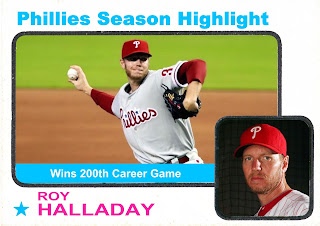 One Sentence Summary:  Roy Halladay pitched eight solid innings in Miami on the way to his 200th career victory and a 2-1 Phillies win.

What It Means:  It wasn't a crisp performance from Doc, and the Marlins are pretty awful, but a win's a win.  The most troubling aspect of this series is the fact that the Phillies only managed to outscore the Marlins in all three games by a combined total of 6-4.

The Phillies open up a three game series tonight in Cincinnati, where they'll try to climb over .500 for the first time this season.

What Went Right:  Halladay allowed a run on five hits while striking out five, and at one point he retired ten Marlins batters in a row.

The Phillies scored their first run in the sixth when Michael Young singled home Ryan Howard, who had reached on a double.  Pinch-hitter Laynce Nix gave the team the lead with a long solo home run to right in the top of the ninth.

Featured Cards:  Halladay won his 199th game in his last start of the 2012 season, back on September 29th.  He had two rough starts to begin the 2013 season, but he pitched well enough to notch career win number 200 in his third start yesterday.  While the franchise boasts a number of Hall of Fame pitchers with over 200 career wins, only four other pitchers have actually won their 200th as a member of the Phillies.  I thought Doc's feat deserved the first of hopefully many 2013 Chachi Highlight cards and I used the Boyhood Photos cards from the 1973 Topps set as the basis for the card.  Here's the list (H/T to Beerleaguer) of pitchers to have won their 200th games as members of the Phillies:

I've featured quite a few Carlton and Roberts cards on my blog over the years, but this is the blog debut for Bender.  This is the sole Bender card in my collection, as his contemporary cards from the 1900s and 1910s are a bit too rich for my blood.  I've seen this set listed as both the 1980 Baseball Immortals set or the probably more accurate 1980-1987 SSPC HOF set.  The set was originally issued in 1980, containing a card for each Hall of Fame inductee to date.  Update cards were issued every year thereafter until 1987 for each new Hall of Fame class.

His 1961 Fleer Greats card (#8) actually pictures him in a Phillies uniform, if you're looking for a reasonably inexpensive card that does do. I've never bothered with the Baseball Immortals card because even though there are no team insignia in the photo, I recognize it as an A's uniform.

Thanks for the info! Are there any other Phillies in the 1961 Fleer Greats set?

And Bender's Baseball Immortals card is officially an A's card as the back of the card lists him as a member of the Philadelphia A's. (And he's wearing the A's uniform as you pointed out.)

And I should have put "Phillies" in quotes since I don't believe there are any actual teams identified within the 1961 Fleer Greats set.

The other two cards in the set I have confirmed as Phillies cards are:

Technically, there are no team designations on the cards, but it appears that they are wearing Phillies uniforms.