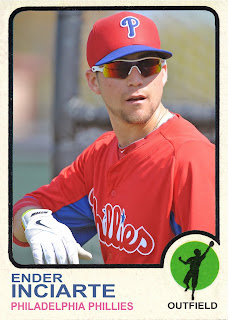 Today's Quiz:  What do Ender Inciarte and Tim Lahey have in common?  Answer to follow below . . .

The season isn't yet 24 hours old and the Phillies have made their first roster move.  Earlier today, the Phillies claimed outfielder Ezequiel Carrera off waivers from the Cleveland Indians.  Carrera will join the team in Atlanta in time for tomorrow night's game and assume the fifth outfielder spot vacated by Inciarte, who was designated for assignment.  As a Rule 5 pick, Inciarte will return to the Diamondbacks if no other team claims him.  Any team that does claim him has to keep him on their active roster for the duration of the season.

In parts of two seasons with the Indians, Carrera has hit .255 in 116 games.  He's played all three outfield positions, although he has spent most of his time in center and left field.  Carrera has a card in this year's Topps Heritage release (#362) and I'll need to hold that card in reserve for when Carrera is deserving of star of the game status.  (He says optimistically.)

Today's Quiz Answer:  Both Inciarte and Lahey made the Phillies Opening Day rosters, only to be jettisoned prior to appearing in an actual game.  Lahey suited up for the team's first four games back in 2008, but never appeared in a game.  I wrote about Lahey back in this post.

Along with his unofficial Chachi card, Inciarte received an official Phillies card within the team-issued postcard set.  And it's worth noting that Carrera becomes the only player on the team's current roster without a Phillies baseball card.

Here's the back of Inciarte's Chachi card:

Don't forget to mention TIm Gradoville next time this happens -- he's a particular favorite of mine because he showed up on autograph issues as well. :-)

Sorry, just realized that Gradoville was a late season 40-man roster addition who never saw game action. So, he's not quite in the same vein.

Gradoville is one of my favorites as well:

Hey, if Eaton got a World Series share, maybe Lahey got one too!

Re Eaton, I always thought it would be cool if a plane had flown over CBP when they gave out the rings in 2009, trailing a banner saying, "Give it back, Adam."

I don't remember whether he was even there for the ring ceremony, but I do recall lots of grumbling and maybe booing when he came into CBP on the back of a convertible for the ceremony after the parade on 10/31/08.

He was there for the ring ceremony. He and Burrell were (I believe) the only two guys in suits. I remember being stunned when he was announced.