It was an exciting time to be a Phillies fan in the summer of 2007, although most of the summer is a blur for me.  We welcomed our first son, Doug, in December 2006 so the early part of 2007 was filled with sleepless nights and anxiety-filled days as we tried to figure out how to be parents.  I have a nice little binder of Phillies cards from 2007, but I honestly can't remember how most of them came into my collection.  My best guess is that they were the result of late night or early morning eBay hunts.


Number of cards in the set:  There are a total of 661 cards in series one and series two, and another 330 cards in the update set.  Continuing with the gimmick cards introduced in the 2006 Topps set, there are variations of 13 different cards in the base set and the update series contains a super short-printed card of a squirrel.  Shaking my damn head.
My very brief thoughts on the set:  If the 2006 Topps set was inspired by the 1972 Topps set, then the black borders of the 2007 Topps set attempt to harken back to the awesome 1971 Topps set.  In my opinion, however, the 2007 Topps set completely lacks the fun and personality found within the 1971 set.  After the circus-like 2006 set, Topps went minimalist in 2007 with the only color on the front being the four little team color-coded squares in each corner.  In retrospect, this may be my least favorite Topps base set design of the 2000s.
Notable competition:  For the second year in a row, Topps and Upper Deck were limited to releasing 20 sets a piece.  Only two of the Upper Deck sets carried the Fleer name.  With the release of Fleer Ultra in July 2007, the brand name rode into the sunset and it hasn't been heard from since.  Shaking my damn head again.

2007 Phillies
Record and finish:  For the first time in 14 years, the Phillies appeared in the Postseason, improbably winning the N.L. East with a record of 89-73.  On September 12th, the Mets held a seven game lead in the division, but their 5-12 collapse down the stretch coupled with the Phillies 13-4 streak gave the Phils the pennant.  It came down to the last game of the season, with the Phillies winning behind a strong pitching performance from Jamie Moyer while the Mets lost their game to the Marlins.  Unfortunately, if you blinked you missed the Phillies in the Postseason, as the red-hot Rockies swept them in three games in the N.L.D.S.
Key players:  Jimmy Rollins threw down the gauntlet at the start of Spring Training, declaring that theRyan Howard (.268, 47 home runs, 136 RBIs) and Chase Utley (.332, 22 home runs, 103 RBIs) continued to put up fantastic numbers.  The infield was strong, but the outfield held their own with Pat Burrell (30 home runs, 97 RBIs), Aaron Rowand (.309, 27 home runs, 89 RBIs) and Shane Victorino (.281, 37 stolen bases) bolstering the team's strong offense.  Cole Hamels assumed the role of staff ace, winning 15 games with a 3.39 ERA.  Moyer backed him up with 14 wins and Kyle Kendrick came up from Double-A Reading to win 10 games.  Brett Myers assumed the team's closer role and saved 21 games.  In the month of September, relievers Myers, Tom Gordon and J.C. Romero went 4-2 with 8 saves and a 2.36 ERA.  Finally, Greg Dobbs led the Majors with 18 pinch-RBIs.
Phillies "were the team to beat" in the N.L. East.  He backed up his words, putting together an MVP season while hitting .296 with 30 home runs, 94 RBIs and 41 stolen bases.  He became the first player in history to tally at least 200 hits, 20 triples, 30 home runs and 40 stolen bases.
Key events:  Howard hit his 100th home run on June 27th in his 325th game, becoming the fastest player in history to reach that mark.  On July 8th, the entire team made highlight reels for their work in assisting the Rockies ground crew in holding down an out of control tarp on the infield of Coors Field.  I put together a Chachi card to commemorate the event.  Utley missed a month of the season after breaking his hand on a pitch from the Nationals John Lannan.  GM Pat Gillick dealt for second baseman Tadahito Iguchi, who hit .304 in his 45 games with the Phils.  Perhaps the most exciting four games of the season came in late August when the Phillies completed a four-game sweep of the first place Mets.  The sweep cut the Mets lead in the N.L. East from six games down to two, and it just so happens there's a Chachi card for that event as well.

This has got to be some sort of a record.  In total, 31 different players from the 2007 Phillies team are featured on Topps cards.
Instead of being called "Classic Combos," these cards should have been called, "Combos."  In the first instance, Rowand and Rollins are both Phillies, but that in and of itself doesn't make their combo classic.  In the second instance, it looks as if Ichiro just happens to be running past Utley at the conclusion of a play during the 2007 All-Star Game.  The third card features Hamels and Martin having a mound conference during the All-Star Game.  None of these combos are classic and therefore none of these cards are necessary.
Who's out:  The only deserving players left out are rookie and speedster Michael Bourn, who received an autographed card in the Topps Chrome release, and relief pitcher Geoff Geary (4.41 ERA in 57 games.)
Phillies on other teams:  Lohse (#353 with the Reds) and Iguchi (#485 with the White Sox) appear with their former teams, as does short-timer Russell Branyan (#UH19 with the Padres).  Reliever Romero, claimed off waivers in June from the Red Sox, appears on a few harder to find 2007 Topps cards - within the Red Sox retail team set (#BOS8) and within the bonus set of cards found within the Red Sox themed Topps factory set (#5 of 5).
What's he doing here:  I'm not sure if this has ever happened before, but every single player appearing with the Phillies in the base and update sets actually played with the team in 2007.  That's incredible.  What's more, every deserving new acquisition received a card within the update series.  Topps completely nailed it in terms of Phillies player selection this year.  I'll give the annual what's he doing here award to the three not-so-Classic Combos cards.
Cards that never were candidates:  Honestly, there aren't many.  I'd have cards for Bourn and Geary, as mentioned previously.  Relievers Romero, Clay Condrey and Jose Mesa (brought back for a second tour of duty) merit cards as well.  Condrey appeared in 39 games for the club, but got completely shut out from any Phillies baseball cards during the year - even the team-issued sets.
Favorite Phillies card:  I absolutely love the card showing Utley and Ichiro in an action-packed photo from the All-Star Game.  Just kidding . . . Howard's card has to be the best, showing his trademark sizing-the-pitcher-up pose from his 2006 N.L. MVP campaign.  A close second is Rollins' card.  I like that Topps opted to go horizontal with his card.

Other Stuff
Recycled:  Topps Opening Day used the same design as the base set, but with an all-white border in place of the black border.  There is also a 14-card Topps Phillies set available to purchase from various retail outlets.  I dismissed these sets at the time, so I don't know if there are any variations in the 2007 set from the base Topps set.
Did You Know?:  Victorino tried to steal my son Doug during the Phillies Photo Day back in 2007.  The day was smoking hot and we waited patiently on the field for the players to start making their way through the picture-taking crowd.  A lot of the players were kind enough to pause for a picture with our seven-month-old son, but Victorino took the extra step of asking if he could hold Doug.  It's a gesture I'll never forget, and it's the reason why Victorino is still Doug's favorite player, even though he now calls Boston home. 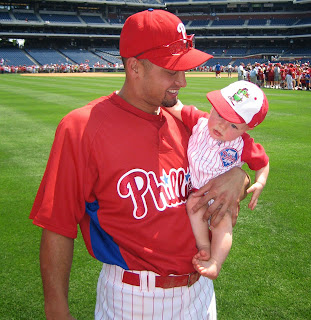 There were variations on the 2007 Topps Phillies team set from the regular Topps set -- I will get back to you on those soon. Also, Topps produced a version of the set for Pepsi -- all the card numbers begin with "P" -- in which the Lieber card is cropped differently and placed in a horizontal layout rather than the standard vertical.

Thanks for the info! I'm wishing now that I hadn't ignored the 2006 and 2007 Topps retail team sets when they came out. I can't seem to find any examples of the sets for sale anywhere.

I don't know if I ever got the retail set so I'm not sure of the variations there. Also in addition to the Lieber card the Pepsi set has a different Utley photo. That set uses the same picture as the Opening day set, him running the bases, but it is on the black border.

Thanks to the link you sent me, my 2007 Topps Retail set is on its way. Now I just need to track down the Pepsi set, which I wasn't aware existed until the comment from 14k Phillies.

I reviewed my binder last night, and here is a rundown of different versions of 2007 Topps base-set-style Phillies cards. In addition to the base Topps cards:

- J.D. Durbin had a different photo in the Chrome set from his base card photo

- Joe Bisenius had only a Chrome card

- Michael Bourn and Tim Gradoville had only autographed Chrome cards

I wasn't aware of the Utley Pepsi variation; I have to take a closer look and move it into my binder perhaps!

Thanks for the info Steve!

To tie up a loose end, the Pepsi Utley card does indeed use a different photo from the base set, but it's the same photo as the one in the team retail set. So if you are trying to track down just _different_ looking fronts, and you have the retail team set, the only card you need from the Pepsi set is the Lieber card.