One Sentence Summary:  In a bit of a pitcher's dual, the Rays came out on top over the Phillies, 3-2.

What It Means:  We're one game closer to the regular season.

What Went Wrong:  Starter Kyle Kendrick tired in the third and allowed the only three Rays runs.

On the positive side, Kevin Frandsen and Domonic Brown both continued their hot springs.  Frandsen had two more hits to raise his spring average to .385 while Brown's two hits raised his average to .424. I'm especially glad to see Brown having a strong spring, as this is definitely a make or break year for the young outfielder.

Featured Card:  Right on schedule, packs of 2013 Topps Heritage showed up at our local Target on Tuesday and I procured my first packs of the year.  The Topps Heritage sets have been steadily working their way through past Topps designs starting with the 1952 design in the inaugural Heritage set released back in 2001.  We're up to 1964 this year, and in my opinion, the set doesn't disappoint. 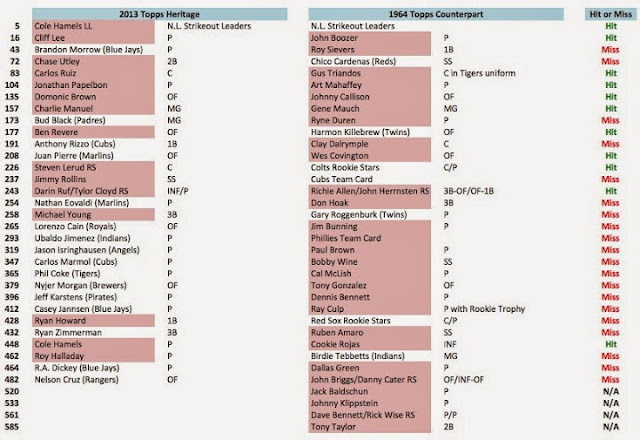 Last year, I went through the process of seeing how well Topps matched up Phillies in the Heritage set to those found in the original 1963 set.  I decided to do the same thing this year and unfortunately Topps didn't do as good a job in the matching department.  To clarify, any specific number belonging to a Phillie in both 1964 and 2013 is considered a "Hit."  As is the matching of new Phillies with a counterpart from their old team in the original 1964 set.  For this reason, new center fielder and former Twin Ben Revere is considered a "Hit" since his card number from the 2013 Heritage set matches up with Harmon Killebrew (of the Twins) in the original 1964 set.

Wait, no team cards or checklists? WTH? Why would they cut those out? That's a pretty integral part of the set, and they've never left those out before! One of many subsets for which I have to buy duplicate cards is my Phillies team photo collection, and even though they did some funky photoshopping (2012) or lame "block the batboy" walls (2005-07), at least they put out Heritage team photos where the original sets had them.

Checklists are less of an issue, but they still should have had those as well.

- match the number of cards in the set (which, IIRC, they have done some years but not all);

- keep up the quirky errors (e.g., 2012 Rookies Stars / 1962 Roosie Stars card with De Fratus and Savery) **that originally existed in the vintage sets** while dropping the made-up alternates such as the reverse photo cards last year or the minis this year--the Bowman Heritage minis were okay, as will be minis in 2024, and that is all;

When they stray from these, they start to lose my interest. I'm thinking that although this is a sharp-looking set, this will be a year that I collect all the Phillies and then, when the price drops a bit, buy a 1-425 non-SP set and be done with it. Which is unfortunate, because I really look forward to spending some money each year putting the Heritage set together.

"Roosie" = "Rookie"; I must have had Rosie O'Donnell or Marius or Kevin Russo on my mind....

I agree with each and every point!