Faithful reader and frequent commenter Steve F. recently opened a collecting can of worms with regards to the 1993 Medford Phillies set, available for sale at the Vet during the wonderful 1993 season.  As he recounts in a comment in this post, he purchased a set of the cards at the recent Philly Baseball Card Show.  He found several variations in his newly purchased set not in the original set acquired from the Vet all those years ago.  But first let's go over what we already know about the set: 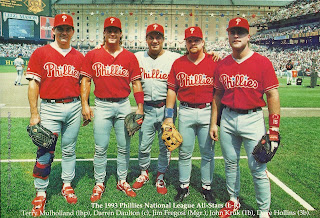 So I've always known there was a total of 40 cards in the 1993 Medford Phillies set, despite what the good folks at Beckett say.  But here's where it gets interesting, and where Steve F.'s detective work comes into play.  His recently purchased 1993 Medford Phillies set contains 36 cards.  31 of the cards match up with cards found in the original 35-card set, but then there are five new cards:
As Thigpen was acquired from the White Sox on August 10th, these five cards would have been available at the Vet from mid-August through presumably the end of the World Series.  As Steve F. points out in his comment, to own a master set of 1993 Medford Phillies cards, 45 total cards are needed.

Which leads me to the Mitch Williams cards featured at the top of this post.  The card on the left is the Williams card from the original 35-card set.  The card on the right is autographed by Williams and it entered my collection at some point over the last 15 years.  (It was either given to me by a friend or it entered my/our collection when I got married and consolidated my wife's baseball card collection into mine.)  The backs of the cards are identical, featuring Williams' stats through the 1992 season and a 1993 copyright at the bottom.

I've always wondered what the Williams card on the right was and where it came from, and thanks to Steve F.'s comment I now realize I have one of the four variation cards from the 1993 Medford Phillies set.  That leaves four more cards to go for me in order to have a master set.

Thanks again Steve for shedding some light on this 20-year mystery!
Posted by Jim at 8:00 AM

You're not the only one needing the variations. This post touches on something that always bothered me about the way the Phillies handle -- their often haphazard communication in regards to the updates. If it hadn't been for you, for example, I never would have gotten the updates to last year's second set, let alone ever known about them.

a) Thanks for the credit and for writing the post, especially with the illustrations.

b) Your wife collects (or at least collected) cards too? To quote your father from one of your previous posts, "You're a lucky man, Jimmy."

I'm with Steve. I stopped reading after you mentioned consolidating Jenna's collection into yours. Couldn't get past that line.